When it comes to civil anti-piracy enforcement, BREIN is without a doubt one of the best-known players in the industry.

The group, which receives support from Hollywood and other content industries, has shuttered hundreds of smaller sites and services in recent history. It was also responsible for taking down Mininova, once one of the largest torrent sites online.

Despite the COVID pandemic, BREIN continued these enforcement actions in 2020. The group has just published a detailed overview of last year’s accomplishments, which provides a clear insight into the group’s anti-piracy priorities.

Looking at the numbers we see that the anti-piracy group has closed the books on a rather productive year. In total, it completed 479 investigations which resulted in the shutdown of 466 illegal sites and services.

These targets include torrent and streaming sites but also open directories, Facebook groups, and sellers of illegal IPTV subscriptions. In addition, over a million links to pirate sites were removed from third-party search engines such as Google. 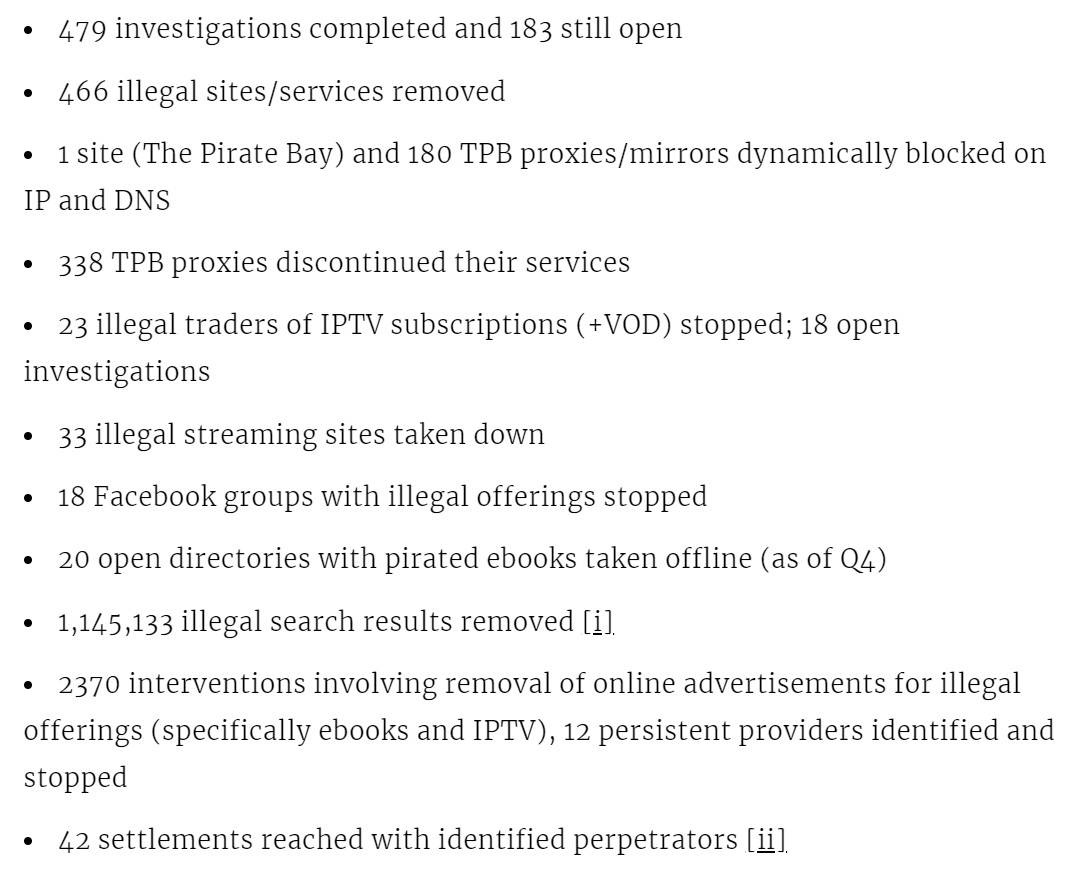 BREIN often starts its investigations based on referrals from copyright holders. Interestingly, some referrals point to scam sites. These are fake pirate sites that try to trick people into handing over credit card details or other info.

In 2020, BREIN received 154 of these tips from copyright holders. The sites don’t offer pirated content so BREIN doesn’t have to take action. However, the group was kind enough to report them to ScamAdviser.com, so people can avoid these traps in the future.

One of the most prominent achievements is the Pirate Bay blockade. After a legal battle of more than ten years, the court ruled that Dutch ISPs have to block access to the torrent site and all proxies that pop up.

This ‘dynamic’ blocking order allows BREIN to add any new IP-addresses and domain names that may appear online. It doesn’t just apply to the main Pirate Bay site. In total, 180 proxies and mirrors were added to the blocklist.

According to BREIN, this measure resulted in a significant decrease in Dutch Pirate Bay visitors. The group hopes to extend its reach in the near future, by requesting more blocking orders from the court.

“The blocking of access to the illegal bittorrent site The Pirate Bay has led to a drop of more than 95% in Dutch visitors. Now that it has finally been granted by the Dutch courts in 2020, BREIN is focusing on obtaining blocking of other popular illegal sites as well,” BREIN notes.

In addition to these measures, the anti-piracy group also took direct action against the operator of the proxy site provider Piratebay-proxylist.net, which had millions of monthly visitors. BREIN took over the domain and the operator agreed to pay 280,000 euros in compensation.

As every year, BREIN also goes after uploaders and other people who make pirated content available. Just last week, it announced a settlement with a large-scale uploader of Dutch comic books, who was tracked down through open-source intelligence.

In 2020, the group signed a total of 42 settlements with copyright infringers, and efforts to tackle other major uploaders will continue.

BREIN also started to warn large-scale torrent uploaders. The group is not interested in casual pirates, but tracks down the big fish and asks Internet providers to forward a warning to these subscribers.

This warning campaign is still at an early stage but BREIN hopes that it will have a significant impact in the long run.

Finally, BREIN is also hinting at possible criminal prosecutions. Generally speaking, copyright infringement isn’t a priority for Dutch law enforcement. However, that may change when there’s an annual turnover of 100,000 euros, or when there’s an organizational layer involved.

The Dutch Fiscal Information and Investigation Service (FIOD) is currently processing a case referred to it by BREIN, and more referrals are in the pipeline.