Notices of infringment sent by rightsholders under the Digital Millennium Copyright Act are supposed to identify infringing content so that online services can remove it, thus protecting the rightful owners.

Increasingly, however, a minority of online actors view DMCA notices as a tool to disrupt and disappear content that isn’t infringing at all.

A little over a week ago, persons unknown began sending DMCA notices to YouTube, claiming that the targeted content infringed the rights of games developer Bungie. Working on the basis that the notices were legitimate, YouTube removed the videos, some of which were uploaded by high-profile Destiny content creators. Other notices targeted Bungie’s own channels.

At least initially, confusion reigned. Bungie is a supporter of fan-created content and has a policy that specifically allows videos to be uploaded to YouTube. So why was the creator of Destiny damaging itself and its fans? In short, it wasn’t.

“We’re aware of a series of copyright takedowns on YouTube and we’re actively investigating. This includes content on our own Bungie channels. These actions are NOT being taken at the request of Bungie or our partners. Please standby for future updates,” the developer wrote on Twitter.

Bungie went on to criticize Google for processing the fake notices but noted that the company had agreed to implement improvements to reduce such mistakes in the future. Initial chaos aside then, Bungie and Google acted to clean up the mess but it’s now clear that Bungie isn’t prepared to let this go.

In a relatively unusual move, the developer has filed a full-blown lawsuit in the United States to identify the culprits and hold them to account.

Late Friday, Bungie filed a lawsuit in a Washington court against John Does 1-10, the currently anonymous senders of the fraudulent DMCA notices. The 29-page complaint begins with allegations of abusive notices sent under the DMCA and then lists five additional causes of action including trademark abuse and violations of consumer protection law.

The lawsuit states that the bogus copyright complaints not only disrupted Bungie’s player community and streamers, but also caused Bungie itself “nearly incalculable damage.” Bungie then explains that weaknesses in YouTube’s systems mean that these types of abuse are easily carried out.

“Doe Defendants were able to [send fraudulent notices] because of a hole in YouTube’s DMCA-process security, which allows any person to claim to be representing any rights holder in the world for purposes of issuing a DMCA takedown,” Bungie explains.

“In other words, as far as YouTube is concerned, any person, anywhere in the world, can issue takedown notices on behalf of any rights holder, anywhere.”

Bungie says that as long as fraudsters have a Google account, they can fill out a takedown form and YouTube will process the takedown request with no additional checks or verification. This loophole was exploited between March 17 and March 22 when a newly-created Gmail address (deliberately crafted to look like an email address used by CRC) sent a wave of fake notices to YouTube.

They apparently did not look like legitimate CRC notices, but that wasn’t noticed at YouTube, meaning that the innocent YouTubers received copyright strikes for no reason. 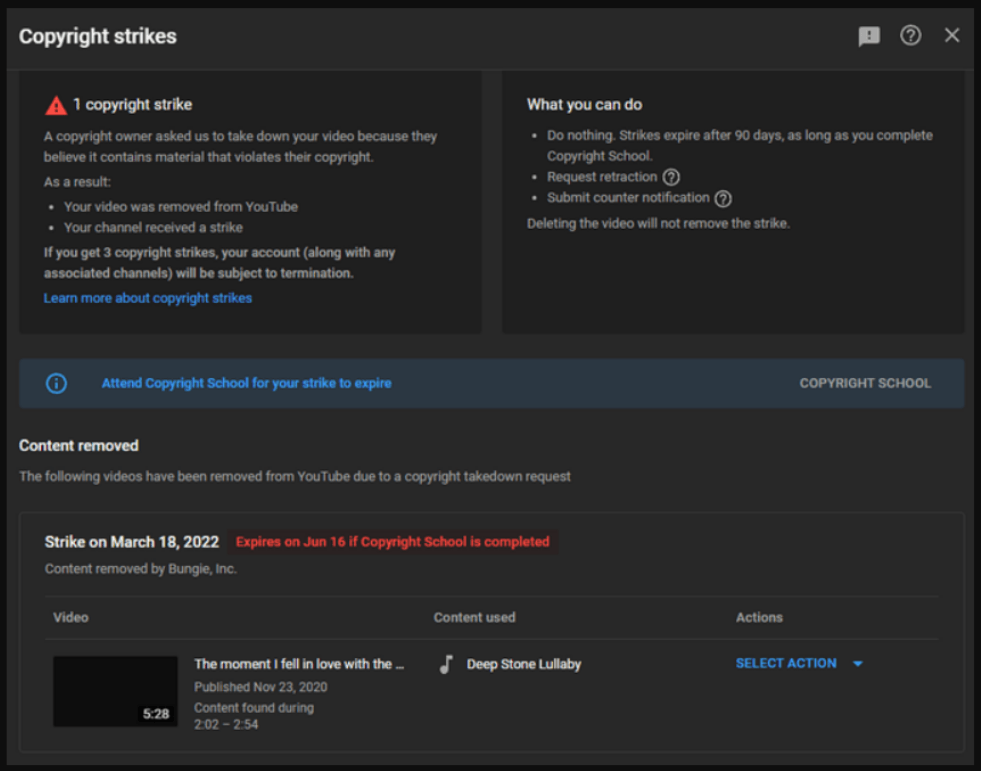 The same Gmail address was used to contact the affected uploaders with messages that attempted to discredit legitimate takedown notices sent by CRC on behalf of Bungie. A second newly-created Gmail account was then used to send abusive messages to the email address of Bungie’s brand protection vendor.

“This caused Bungie significant reputational and economic damage, for obvious reasons,” Bungie writes, noting that “the Destiny community was bewildered and upset, believing that Bungie had reneged on a promise to allow players to build their
own streaming communities and YouTube channels on Destiny 2 content.”

Unmasking the Fraudsters, Reassuring the Community

At this stage, Bungie admits it doesn’t know the identities of those who sent the notices but it fully intends to find out.

The developer says it will use a DMCA subpoena (and other means) to identify them and hold them accountable for their “tortious and illegal conduct, and, frankly, to demonstrate to anyone else stupid enough to volunteer as a Defendant by targeting Bungie’s community for similar attack that they will be met by legal process.”

Bungie’s complaint stresses the importance of the Destiny 2 community, highlighting the contributions made by YouTubers including My Name is Byf and Datto. Since the game is free to play, the health of the community is vital since that’s what encourages people to buy additional content.

In short, a happy community directly reflects in Bungie’s bottom line and the community was not happy when they thought Destiny creators were being targeted by Bungie.

Bungie’s complaint reveals that in early March, CSC was told to issue 41 DMCA takedowns against videos that, in Bungie’s view, violated its policy on use of its intellectual property. For instance, songs ripped from the game, game cut-scenes, or anything else that doesn’t contain a substantial amount of “player created content.”

In this case, all DMCA notices targeted Destiny 2 original soundtracks that were subsequently removed from YouTube for copyright infringement by March 16, 2022. Bungie says that all of the notices utilized a particular Gmail address and on March 17, the defendants crafted their own Gmail account to mimic it in order to send the fraudulent DMCA notices.

In short, Bungie believes that the YouTube users who were impacted by its earlier DMCA takedown notices decided to teach Bungie a lesson by sending out the wave of fraudulent DMCA notices under the name Bungie, Inc. They then sent messages to affected uploaders telling them that the original and real Gmail address used for takedowns was a fraud.

It’s not especially difficult for security-aware individuals to hide their identities when sending fake DMCA notices but the defendants in this case may have slipped up. If Bungie is correct that the defendants are indeed those targeted in the batch of notices sent out early March, that list is not long and might be narrowed down quite quickly.

According to the complaint, the defendants also filed a fraudulent DMCA notice against their own YouTube account, which sounds reasonable if the aim is to be seen as a victim. However, they responded to their own fake takedown notice with a DMCA counternotice to YouTube, stating that both the legitimate and fraudulent DMCA notices were fraudulent.

Bungie’s lawsuit is particularly scathing of Google/YouTube’s processes, noting that the system introduced significant delays due to an opaque support process that stranded Bungie in a “circular loop”.

In order to get something done, Bungie involved its Global Franchise and Global Finance directors but by March 21, responses still hadn’t arrived. On March 22, Google said that it had suspended the accounts of the fraudsters but would not reveal their identities.

In response, Bungie filed this lawsuit which will compel Google to do so. The lawsuit notes that one of the defendants sent emails to YouTubers admitting their part in the scheme and blaming YouTube and Bungie for various shortcomings, including by not responding appropriately to previously-sent bogus notices.

“Finally, I know this hardly means anything, but I apologize to you and everyone else who was affected by my selfish actions. You have every right to be furious with me. My goal was to get Bungie to see the fake takedowns and stop them. That’s all,” the email reads.

Bungie appears disinterested in the apology and is piling on with a number of claims, including that the defendants sent fraudulent DMCA notices containing “knowing and material misrepresentations”, in violation of 17 U.S.C. § 512(f), for which it is entitled to damages.

“As such, Bungie is entitled to damages and injunctive relief, including enhanced statutory damages of $150,000 for each Fraudulent Takedown Notice that willfully infringed Bungie’s copyrights,” the complaint adds, throwing in allegations of business defamation, violations of the Washington Consumer Protection Act, and breach of contract for good measure.