BitTorrent throttling is not a new phenomenon, but it is getting more attention lately, because the number of people who use BitTorrent keeps growing. Up until today however, there has been no reliable data that revealed the scope of it.

Last week we reported on a new and reliable tool that tests whether or not your BitTorrent traffic is being limited. The tool is developed by the Max Planck Institute, who have released new data today. The findings reveal that the BitTorrent connections of half of Comcast and Cox’s customers are being cut. In addition, the data shows that these practices take place 24/7, disproving Comcast’s earlier statement to the FCC

“Comcast’s network management practices (1) only affect the protocols that have a demonstrated history of generating excessive burdens on the network; (2) only manage those protocols during periods of heavy network traffic,” Comcast wrote in a filing to the FCC last February.

This is far from the truth. As can be seen for the graph below, there is little difference in the percentage of blocked customers throughout day. Furthermore, the data shows that there is also no difference between weekends and weekdays. BitTorrent is simply blocked all day long, no matter how busy their network is. 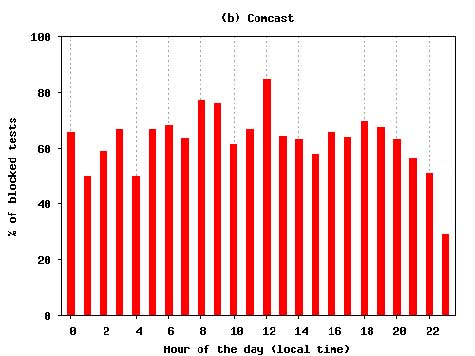 The Max Planck Institute tested the connections of 788 Comcast customers, 494 (62%) experienced a slowdown of BitTorrent traffic. Comcast is not alone though, well over 50% of the Cox subscribers that participated in the study were also throttled. The good news is, other ISPs don’t seem to restrict BitTorrent traffic on a wide scale.

Ben Scott, policy director of Free Press, said in a response: “Consumers have no reason left to trust their cable company. This independent study confirms that Comcast is still blocking its customers from using popular applications — despite the FCC’s investigation and widespread public outrage. And worse, the harmful practice appears to be spreading through the marketplace.”

After being pressured by the press and thousands of upset customers, Comcast has announced that it will stop targeting BitTorrent transfers, (somewhere in the future) and promised to invest in its network capacity. For the time being the company will continue to throttle BitTorrent users.

We have asked the FCC for a response, but they had not yet responded at time of going to press