Mindgeek is without doubt one of the largest and most powerful adult entertainment conglomerates in existence today.

Several of these tube sites became big by offering access to a wide variety of content, including pirated videos that were posted by their users without permission. That doesn’t mean that MindGeek is turning a blind eye to pirates. On the contrary.

To address this issue, MindGeek’s daughter company regularly goes to court. In a recent case, filed at the federal court in the District of Washington, Vasily Kharchenko, the alleged operator of Daftsex.com and Artporn.com, stands accused of mass copyright infringement.

These sites have been a thorn in MindGeek’s side for years but targeting their domains with hundreds of thousands of DMCA takedown notices didn’t produce the desired result. So, in 2020, MindGeek obtained a DMCA subpoena against Cloudflare to unmask their operator. This quest eventually led to Kharchenko.

MG Premium alleges that the operator personally uploaded 2,143 of its copyrighted works to the sites. Through the court, the company hopes to stop these infringements. In addition, the company demands compensation for the damages suffered.

Thus far, the lawsuit has been a one-sided battle, as Kharchenko didn’t respond to the allegations at all. This prompted MG Premium to request a default judgment, asking for $15,000 in damages per infringement, for a total of $32,145,000.

In addition, MG Premium also moved for a broad injunction that would require various third-party online services to cut their ties with the infringing sites and their alleged operator. The adult company believes that would help to shut down the piracy operation.

In addition to DaftSex and Artporn, the proposed injunction also includes Biqle.com and Daxab.com. The latter is a CDN for streaming videos, which is used by DaftSex and others. All these sites are allegedly run by Kharchenko.

In addition, other domain name companies, hosting, and CDN providers should be compelled to cut their ties with the sites in question. Those companies include Cloudflare, FDC Servers, Namecheap.com, NameSilo and PrivacyGuardian.org.

An order of this magnitude would be very effective indeed, but the court had its reservations. Despite the fact that the accused failed to appear in court, United States District Judge Benjamin Settle denied the injunction.

According to the Judge, MG Premium should provide more details about the contacts between the defendant and the third-party services, in order to justify such a “sweeping” order.

“The Court is not prepared to issue a sweeping injunction against numerous nonparties based only on the conclusory, unsupported allegation that Vasily Kharchenko is in privity with them, or on the implausible claim that Kharchenko controls these entities,” Judge Settle writes. 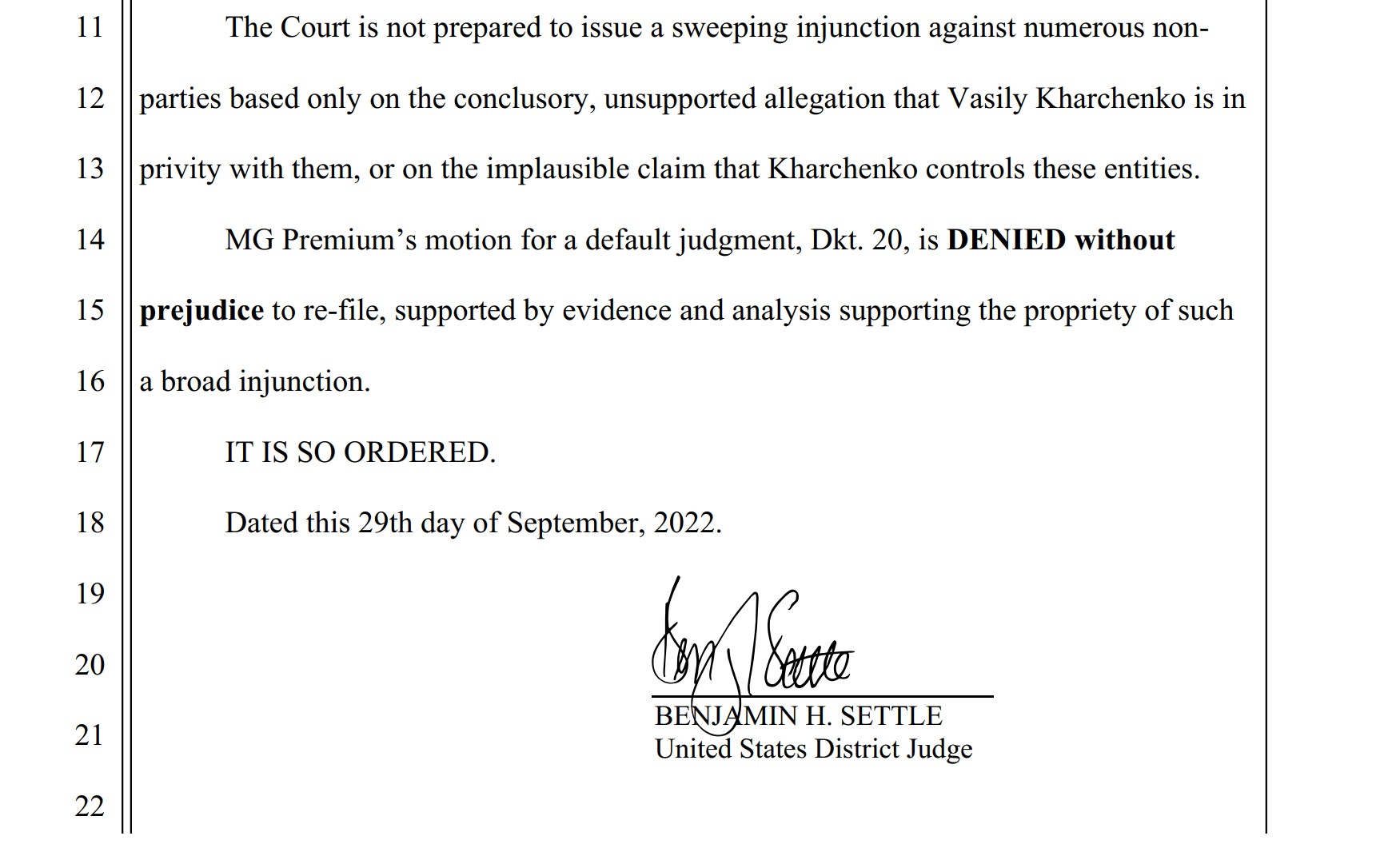 This means that MG Premium must go back to the drawing board and submit a new motion for a default judgment, supported by additional evidence and analysis.

If the company eventually gets its way this could spell trouble for other pirate sites as well. In any case, it will be interesting to see how the case develops and what the potential aftermath might be.