Court Shuts ShareConnector Down For Good

Five years ago, when most BitTorrent sites had only a handful of visitors, ShareConnector was serving eDonkey links to millions of file-sharers every month. This popularity didn’t go unnoticed by the local authorities, who were tipped off by BREIN and started a criminal investigation into the operator of the site, as well as the people behind the site Releases4U.

What followed was more than 5 years of legal battles in both civil and criminal court cases. In the criminal case the operator of ShareConnector came out as the winner in 2007 and was released from all charges.

The court ruled that the authorities failed to provide any evidence to prove ShareConnector was involved in copyright infringement nor enough to prove that it was criminal in nature. In addition, the judge ruled that the initial arrests were unlawful as the evidence provided by BREIN was insufficient.

After this decision ShareConnector came back online. However, this comeback was short lived as local anti-piracy outfit BREIN initiated a civil lawsuit, trying to prevent the operator from keeping the site up and running. This lawsuit was won by BREIN but the ShareConnector operator decided to appeal the ruling. 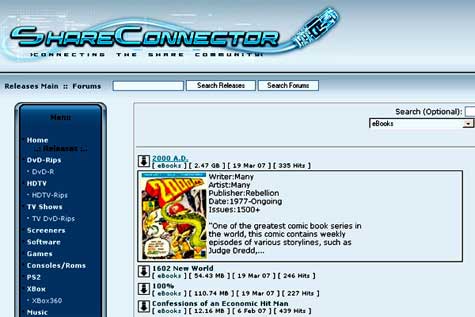 This week a court announced the verdict of the appeal and it came out negative once again. Although the court ruled that the operator of ShareConnector wasn’t guilty of copyright infringement, it said the site must remain closed for good. The judge ruled that sites that offer hash links (like .torrent links) are facilitating copyright infringement, an unlawful behavior.

The outcome of the case is disappointing to aDI, the operator of the site, who further said that it didn’t surprise him. He had hoped, however, that the ruling in the appeal would be in line with recent cases in Spain where P2P indexing sites were deemed legal.

“The results are just what I expected, so nothing surprising here considering all the similar recent cases with just about the same conclusion we see here. The trend has been set by those ignorant old judges that fail to see the logic, contradicting the rulings from Spain,” said aDi in a response to the verdict.

“Unfortunately this is not Spain, the Dutch legal system is dysfunctional, lacking logic and professionalism. Why does it take more than five years and so many criminal trials to prove a simple fact? How come all the pathetic private organizations whose main interest is money and not the artists, get away with lies and deceptions spreading their propaganda in the media?,” he added.

What remains for the ShareConnector operator is the appeal of the criminal case that will be heard in April. In 2007 he was released from all charges, but after two years the Department of Justice filed the appeal. The charges in this case are membership of a criminal organization and (assisting in) the distribution of copyrighted material. The additional charges of copyright infringement were dropped last week.

In the upcoming trial Dr. Johan Pouwelse will appear as an expert witness on behalf of the defendant. Since downloading copyrighted films and music is not illegal in The Netherlands, he is expected to testify that there are various ways for eDonkey users to disable the upload feature. Whatever the outcome of the criminal trial, ShareConnector will never return.