Demonoid is one of the biggest torrent sites around. Hosted to the west of Russia in Ukraine, the site has settled outside the reach of the various anti-piracy outfits that previously tried to shutter the tracker.

Threats from the movie and music industry aside, Demonoid has also been the target for dozens of large and small DoS attacks. Usually these attacks only slow the site down a bit, and in the worst case they result in several hours of downtime before Demonoid staff takes care of the problem.

During mid-June reports started to come in to TorrentFreak from Chinese and Taiwanese Demonoid users who complained that the site was inaccessible to them. Both the site and tracker were no longer functioning. Browsers reported a “server not found” error and torrents with a Demonoid tracker returned a “error: hostname not found” message.

For the affected users this could mean only two things. Since Demonoid was working fine in other countries, either Chinese and Taiwanese ISPs has started to block Demonoid’s website and tracker, or the people running Demonoid had decided to block IP-ranges from these countries.

To find out more about the origin of the connection issues, a TorrentFreak reader based in Taiwan decided to contact his Internet provider, who dismissed the first option after some investigating.

“We cannot access Demonoid.com either,” he was informed by his ISP. “We attempted to access the site via the other ISPs in Taiwan but all these attempts failed. We determined that there is no connection problem. The Demonoid server is rejecting all requests from Taiwanese IP-addresses.”

Despite the fact that Demonoid’s owner has never responded to our inquiries in the past, we asked for a comment on the blocking issue and got a swift response. Indeed, as we initially guessed, Demonoid is actively blocking IP-ranges in Taiwan and parts of China because that’s where the DoS attacks come from.

“There is a DoS coming mostly from there,” Demonoid’s admin told TorrentFreak in a brief reply.

We have yet to receive an answer to the question whether the block is temporary or permanent. In the meantime, affected users can bypass the restrictions by using a VPN-service. Both ItsHidden and VPNReactor offer free, but limited accounts.

Demonoid’s servers.. Made in Taiwan 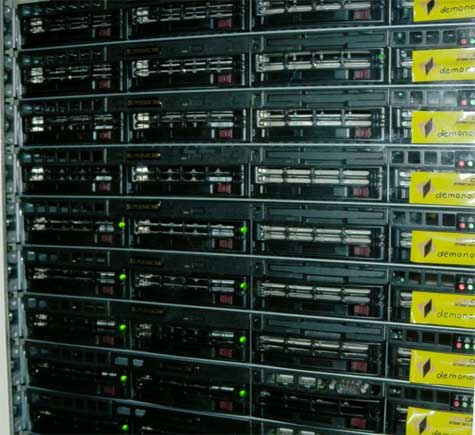