One of the great ironies of anti-piracy technologies is that they not only offer zero benefits to paying customers but when things go wrong, pirates are often better off.

What appears to be a classic example of this topsy-turvy relationship emerged last night in a long complaints thread on Steam. Players who had legitimately bought Marvel’s Guardians of the Galaxy found that it was impossible to play the game since it simply wouldn’t load.

The problem seemed to appear after players updated the game, leading some to believe that code may have broken the game. However, as more and more complaints came in, another potential problem was identified. It was so simple as to be almost unthinkable but so devastating that it rendered games completely useless.

After complaining to Guardians of the Galaxy support, one Steam user obtained acknowledgment from the company that the problem was indeed server-side, which was quite the annoyance for a single-player game.

“Unfortunately I don’t have an estimated time for the resolution. But our team is working on it,” the response reads.

“I’m expecting a fast resolution. The issue seems to be on our side, we will probably publish more info on our official media.”

At the same time, some users resorted to uninstalling the game and redownloading to see if that made a difference – it didn’t. PC restarts also failed to solve the problem. Then it became clear that other games were affected too (Planet Zoo, Shadow of War, Football Manager, Dead Rising, Tomb Raider plus others) and all appeared to have at least one thing in common – Denuvo DRM.

Could it be that something had gone wrong with this anti-piracy technology?

Someone Forgot to Renew a Domain

With the problems now affecting a large number of users, the complaints inevitably spread to Twitter where one eagled-eyed user explained what he believed had happened. According to Alex Buckland, the DRM provider for all of the affected games had let a key domain expire, rendering the system inoperable.

“@PlanetZooGame @shadowofwargame your DRM provider has let their domain name lapse, and it’s killed your game startup… along with multiple other games I imagine,” he wrote.

Buckland identified the domain ‘codefusion.technology’ as the culprit and offered a screenshot of its WHOIS records, which clearly shows that the domain expired on September 24, 2021, and had not been renewed. 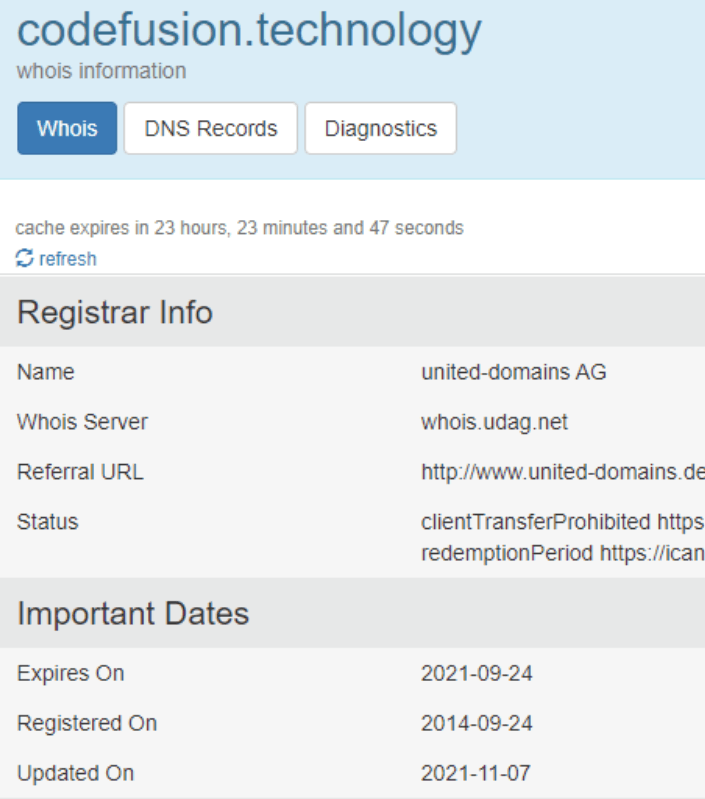 Following the failure to renew, the domain then went into a grace period but when that expired too, it appears to have been removed from DNS records. This meant that the domain would not resolve to an IP address, effectively breaking the system.

To solve the problem, some users on Steam posted up tutorials for players to modify their Windows HOSTS file to point to the last known IP address for the domain. This appeared to do the trick but obviously, such drastic measures shouldn’t be needed to play a game that has been legally purchased – especially those that are single-player only.

What Does Denuvo Have to Say About The Issues?

Given that all of the above is just one side of the story, TorrentFreak contacted Denuvo-owner Irdeto to discover how they viewed the problem and whether they were really to blame, or someone else. Sadly, that proved completely fruitless.

After sending a set of questions to two of our usual contacts at the company, we received a pair of automated emails stating that our correspondence was “undeliverable”, that the messages had been “bounced by administrator” and as a result had permanently failed.

It seems unlikely that this is part of the same problem but it appears that Denuvo does have some communication problems right now. We’ll update this article should we eventually get a response.

In the meantime, someone has now renewed the codefusion.technology domain, which appears to have solved players’ problems. It’s now set to expire on September 24, 2022, meaning just a single year was added to the bank. Hopefully next year doesn’t bring similar problems.