In June 2008, police arrested Blackistef, the administrator of two Internet sites. The action was taken following complaints by music rights group SACEM who had taken exception to his operations at BitTorrent links forum Torrentnews.net, and Torrent-public-center.com, a BitTorrent meta-search engine.

“I spent a day like a thief, locked in their cells filled with shit and even showered on the walls,” said Blackistef at the time. “A hole in the ground for a toilet (which you can not flush) and a single concrete bench.”

Blackistef lost his case in 2009 and was given a four month suspended jail sentence and ordered by a court to pay SACEM 17,000 euros in damages, plus costs.

Earlier this year the Court of Appeal heard the case but rejected Blackistef’s defense that as a service provider he should not be held responsible for links posted by users, provided he complied with takedown requests.

The court disagreed, noting that having the dirty word “torrent” in a domain name was reason enough to presume that Blacklistef knew that infringement took place on the sites. The original ruling was upheld leaving Blacklistef with a debt to SACEM of just over 19,000 euros.

Speaking with TorrentFreak today, Blacklistef told us that TorrentNews was a place where members exchanged torrent links found on The Pirate Bay, isoHunt and Miniova. It was a non-profit forum and there were no ads to create income.

But now, five months later, SACEM are hoping to generate some revenue of their own.

“Hello, this is for you!” said the bailiffs at Blacklistef’s door last week, handing him documents containing the breakdown of debts owed. As can be seen from the details below, in interest alone SACEM are already claiming more than 500 euros. 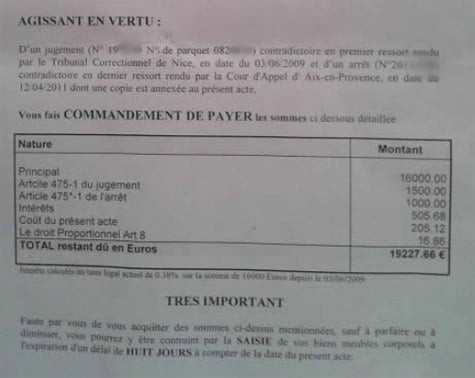 The documents further warn that if Blacklistef doesn’t pay the money owed within 8 days, the bailiffs will seize his property to cover the debt.

“But why me, what have I done to deserve this?” asks Blacklistef rhetorically. “Fortunately the costly act comes with a copy of the decision, and allows me to read the reasons for my conviction.

The accused has created websites contributing to the development of a vast underground economy, and whose actions contributed to the destabilization of the economy of artistic creation. He must be given an exemplary and deterrent punishment.

“According to the judge, I was the “Godfather of Wareziens,” he told TorrentFreak.

In order to try and reach some sort of compromise, Blacklistef went to see the bailiff and offered an interim payment of the 50 euros he had in his pocket to show good faith, but the offer was declined. Two days later he received documents containing the notice below: 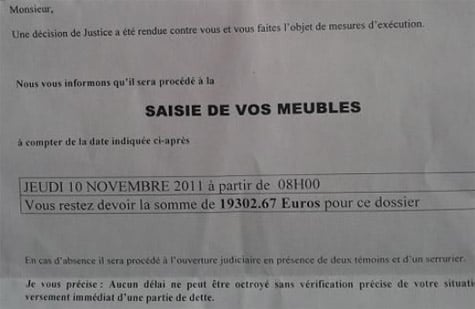 So now Blacklistef has until tomorrow to raise 19,303 euros or he says he will be forced to “say goodbye” to what little he has left. “My coffee table, my wooden shelf, my carpet,” he adds.

Other items he could have sold to raise money, including computer equipment, a TV and a cable receiver, were all confiscated by the court and never returned.

“So I called on the community to help me pay my SACEM fine so that I may not be ruined for a simple story of linking to torrents,” he concludes.

Blacklistef’s PayPal fund raiser can be found here, but progress is slow with just 175 euros pledged. Maybe a miracle can happen overnight.