DistriBrute is a brand new desktop deployment solution developed by 4M88. Instead of several decentralized distribution servers, it uses the BitTorrent protocol to update workstations in a local network.

With DistriBrute, distribution servers are no longer needed. The data doesn’t have to be distributed from one location, since all the workstations connected to the network actively help in the spreading the data. Every desktop in the system becomes a peer, and helps to send the data to other desktops. The result: faster distribution of updates and patches, and a significant cost reduction.

There are more selling points other than the cost reductions and speed improvement. Since servers tend to use a lot of energy, between 6000 and 7000 KWh a year, it can also be seen as a ‘green’ solution. This ‘green’ aspect has not gone unnoticed. Today, DistriBrute won the audience price of the Digikring Innovation Awards, an initiative that rewards environment friendly ICT solutions.

After winning the award, DistriBrute officially launched. Thus far, it had two successful test runs at large educational institutions in The Netherlands, and the initial results are promising. At INHOLLAND, a concept version of DistriBrute is now used to send software to 6500 desktop computers across 16 different locations. It thereby eliminates 20 servers that were used before to distribute 25.6 TBs of data across the network. Even more so, the P2P based solution speeded up this process significantly, from 4 days to only 4 hours.

The cost savings for those who use DistriBrute are immense. Leo Blom, co-founder of 4M88 told TorrentFreak that they were able to cut 50 servers at ROCMN, another Dutch educational institution. The costs to manage a server can get as high as $10,000 a year, but these will evaporate thanks to DistriBrute.

DistriBrute is one of the first commercial products for business use to reveal the true power of the BitTorrent protocol. For now, availability is limited to organizations in The Netherlands, in the first quarter of 2009 it will be released internationally. 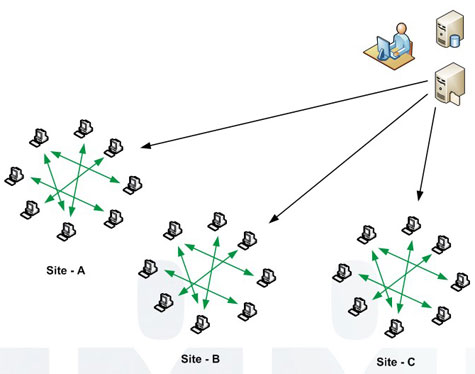