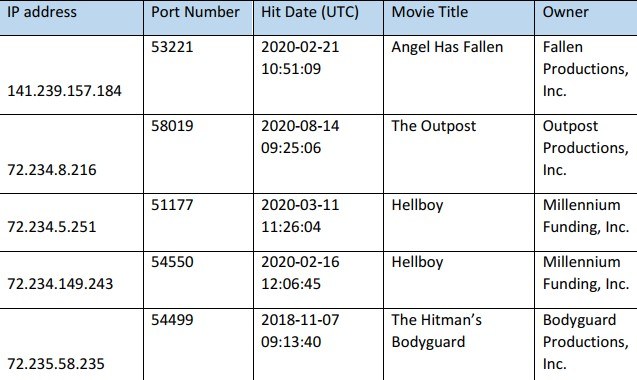 Over the past decade, hundreds of thousands of people have been accused of sharing pirated content via BitTorrent.

File-sharing lawsuits are a common phenomenon in US courts as well. Hundreds of new cases are filed every year, with most targeting a single defendant per lawsuit.

Most of these cases follow a procedure that’s well defined. The copyright holder files a complaint and requests a subpoena from the court requiring an ISP to identify the account holder connected to the ‘infringing’ IP-address. This request is then reviewed by a judge, who may or may not sign off on it.

Several courts have grown skeptical of these cases over the years, with some requiring rightsholders to present “something more” than just an IP-address as evidence. Other courts don’t share these reservations, and pretty much all subpoenas are signed off by a judge.

Although it may appear that the legal procedures surrounding these BitTorrent piracy cases are pretty much set in stone after a decade, Hawaii-based attorney Kerry Culpepper has had success with a ‘loophole’ approach recently.

Instead of filing a standard copyright infringement lawsuit, the attorney requested a DMCA subpoena on behalf of several movie companies. Through the subpoena, the companies asked Hawaii Telecom to identify the account holders behind 25 IP-addresses that allegedly shared “Hellboy,” “Angel Has Fallen,” The Hitman’s Bodyguard” and other movies via BitTorrent.

This approach is noteworthy because DMCA subpoenas don’t require oversight from a judge. If the paperwork is submitted properly, a court clerk can sign off on it without any hassle. That can sometimes happen within a day.

Speed is not the key issue here, of course. Using this shortcut also saves money and other resources. Filing a DMCA subpoena costs $49 while the fee for a traditional copyright complaint is $402. This is without the time that goes into other legal paperwork and court hearings.

The advantages for copyright holders are clear. That said, using DMCA subpoenas to identify alleged BitTorrent pirates is not without controversy.

The RIAA tried a similar tactic two decades ago but was stopped in court when ISPs objected. The ISPs argued that DMCA subpoenas are only valid when an Internet service stores or links to the infringing content, not when they merely pass on traffic.

In two separate rulings, the DC Circuit and Eighth Circuit appeals courts eventually concluded that DMCA subpoenas can’t be issued against ISPs that are mere conduits. This is because the “notifications” described in the DMCA could not be applied to “mere conduit” ISPs that don’t store infringing material. As such, DMCA subpoenas are not an option.

Despite this legal background, the clerk at the federal court in Hawaii signed off on the request earlier this month. This means that the movie companies can request Hawaii Telecom to hand over the subscriber information.

This appears to conflict with earlier cases but the movie companies disagree. In fact, their attorney believes that there is sufficient reason to believe that DMCA subpoenas can be used against ISPs under certain conditions.

Culpepper notes that the Ninth Circuit Appeals Court, which Hawaii falls under, never ruled on the mere conduit issue in a case like this. Hence, it’s an open question. In fact, the attorney argues that more recent decisions suggest that the DMCA notifications are valid in this case.

In repeat infringer cases against ISPs such as Cox and Grande, courts have concluded that these providers have no right to a DMCA safe harbor because they failed to act on DMCA notifications. This suggests that these notices are valid and apply to conduit providers.

This is a clever argument that could hold up but it hasn’t been tested in court, as Hawaii Telecom didn’t object to the DMCA subpoena. Instead, the clerk signed off on the request without asking questions. So for now, this shortcut works.

Culpepper declined to comment on his reason to choose this route, but we assume that costs play a major role. The personal information obtained through the subpoenas will likely be used to negotiate settlements with the infringers. And those who refuse to settle risk being taken to court in a proper lawsuit, of course.

A copy of the DMCA subpoena request, which was signed of by a clerk of the Hawaii federal court, is available here (pdf)