Traditionally, BitTorrent users load a .torrent file in their desktop client to download something, but today they have several alternatives, each with their own benefits.

In the past we’ve covered a wide variety of torrent-download services. However, the new startup Fetch.io is one of the most impressive we’ve seen thus far, and not just because they’re giving away accounts for free.

Fetching torrent files through Fetch.io is pretty straightforward. Users only have to paste in a torrent url and Fetch.io takes care of the download through their connection. Once the download is finished, users can transfer it to their computer, or stream it directly from the remote server if it’s a video file.

Aside from streaming files in one’s Internet browser, video files are also automatically encoded into flash and MP4 format a few minutes after the download has finished. This means that the files can be easily played on various mobile devices and media players, where supporting formats are automatically detected.

On the sharing part the service has plenty to offer also. In addition to streaming and downloading files for personal use, Fetch.io allows its users to share files directly and hassle free with friends.

Fetching a torrent at > 5MB/s 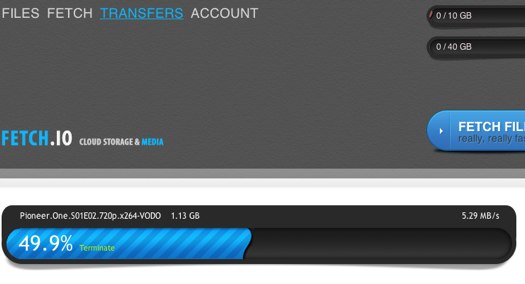 TorrentFreak talked to Rick Olson, one of the founders of Fetch.io, who told us that they’re starting their service in a phase where users aren’t charged anything.

“In the beta phase users get 20GB of storage and 40GB of bandwidth. We plan to handle as many users as possible for stress testing over the next 2 – 4 weeks. In the event we get too many beta users, instead of turning on paid accounts, we will simply close beta signup,” Olsen said.

Olsen further told us that they plan to continue offering free accounts in the future, albeit with limited storage and bandwidth capacity. The pricing of premium accounts is yet to be determined.

While testing Fetch.io we found that in most cases the download speeds of torrents are far beyond what the average downloader usually achieves. This, added to the extra anonymity the service offers and the fact that it’s free, will probably appeal to a wide audience.

And those who don’t plan to use it will profit nonetheless, as Fetch.io’s seeding policy is set at a ratio of 1:1.25. This means that they give back more to the BitTorrent swarm than they leech.

In the coming weeks the beta phase will be used to iron out the latest bugs and optimize the various features. The re-encoding times of videos will be decreased, and they’re also working on more seamless integration with external devices.

“We are already working on the Fetch app that will allow users to stream their Fetch storage contents from their computer like a media center. This project will be open source and hopefully other developers will help us make Fetch content available on more devices,” Olsen said.

Those who are interested can score a free account at Fetch.io while they last and check out the service. They can use a good stress test, so please don’t be too shy, and Fetch whatever you wish.

There are 119 comments. Add yours?