Ever since the raids of 2012, Kim Dotcom has pointed to what he sees as a contract shutdown of Megaupload. Designed by Hollywood and carried out by their partners in the Obama administration and the New Zealand Government, Dotcom claims that his fate was pre-determined and a result of corruption.

One of his claims is that despite the reservations of those in New Zealand’s intelligence departments, Dotcom was allowed to become a resident of the country. This, the entrepreneur says, was carried out to pin him down in a friendly location so that he could be dealt with by the United States.

This morning, at his Moment of Truth event, Dotcom rolled out big guns including journalist Glenn Greenwald, Wikileaks’ Julian Assange and even Edward Snowden himself to deliver his “bombshell”. The latter appeared via video links, connections which Dotcom said we’re being run through a new encrypted browser-based platform under development at Mega. 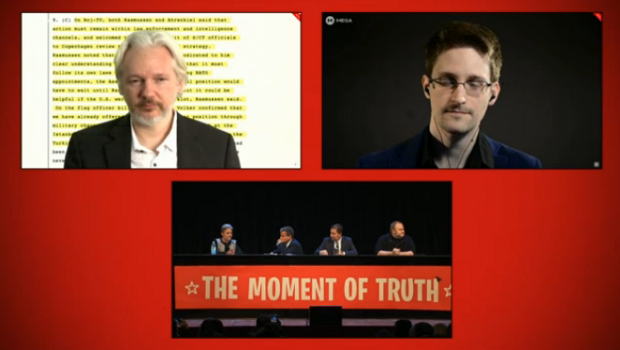 Much of the discussion centered around the alleged unlawful domestic surveillance of New Zealand citizens by their own Government, but the panel frequently weaved in elements of Dotcom’s own unique situation.

“We share the same prosecutor, so I understand what is going on there, on a very personal level,” Julian Assange said of Dotcom.

“[The United States Government] is trying to apply US law in as many countries as possible, applying their law in New Zealand to coerce and pluck out people to other states,” Assange said.

Dotcom’s human rights lawyer Robert Amsterdam spoke at length on the perils of the Trans Pacific Partnership and criticized the New Zealand Government for its treatment of Dotcom.

“What they did [to Kim Dotcom during the 2012 raid] is so beyond the pale that the leader of that democratic government should have resigned on the spot that day,” Amsterdam said.

The event was highly polished and was well received by those in attendance, but failed to deliver on one key front. Dotcom previously said that he would present “absolutely concrete” evidence that Prime Minister John Key knew about him earlier than he had claimed. In the event, nothing remotely of that nature was presented.

However, several hours before the Moment of Truth got off the ground, New Zealand media began reporting that Dotcom would reveal an email at the event, one that would prove that Hollywood had an arrangement with Key to allow Dotcom into the country in order to extradite him to the United States.

The email in question, dated October 27, 2010, was allegedly sent by current Warner Bros CEO Kevin Tsujihara to Michael Ellis of the MPA/MPAA.

Tsujihara is one of the Warner executives the company sent to New Zealand in 2010 to deal with a dispute that was putting at risk the filming of the Hobbit movies in the country. During his visit Tsujihara met John Key and the email purports to report on one of those meetings.

“Hi Mike. We had a really good meeting with the Prime Minister. He’s a fan and we’re getting what we came for,” the leaked copy of the email reads.

“Your groundwork in New Zealand is paying off. I see strong support for our anti-piracy effort. John Key told me in private that they are granting Dotcom residency despite pushback from officials about his criminal past. His AG will do everything in his power to assist us with our case. VIP treatment and then a one-way ticket to Virginia.

“This is a game changer. The DOJ is against the Hong Kong option. No confidence in the Chinese. Great job,” the email concludes.

But while an email of this nature would have indeed warranted a “bombshell” billing, the Moment of Truth concluded without it or any other similar evidence being presented. Even before the event began, Warner Bros were on record describing the email as a fake.

“Kevin Tsujihara did not write or send the alleged email, and he never had any such conversation with Prime Minister Key,” said Paul McGuire, Warner Bros.’ senior vice president for worldwide communications.

“The alleged email is a fabrication,” he added.

The lack of the promised big reveal is fairly dramatic in itself. It’s certainly possible that Dotcom’s team lost confidence and pulled the reveal at the last minute, which would be a wise move if its authenticity was in doubt.

If the email is indeed proven to be a fake, big questions will need to be answered by the person who provided it because up until very recently Dotcom was staking his shirt on it. If it’s genuine, and proving that will be easier said than done now, we’ll definitely hear more as the weeks unfold.