The never-ending story of ACTA goes on in the EU as three different EU committees gave negative recommendations to the International Trade Committee (INTA). The vote – which are advisory, and non-binding in nature – came a day after documents emerged showing that EU negotiators failed to negotiate effectively on behalf of European Citizens and businesses. 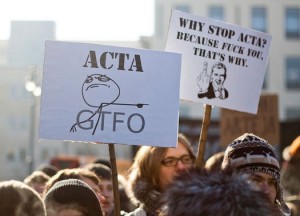 ITRE had previously recommended that it be rejected, and the proposal to that effect was written up by Pirate MEP Amelia Andersdotter and was voted on today. It passed 31 to 25

Meanwhile, the “pro-ACTA” proposal by author and lawyer Marielle Gallo (France, Modern Left party) was defeated narrowly in the JURI vote, 12 to 10 with 2 abstentions. Their new proposal will now be written by Evelyn Regner (Austria, Social Democrat)

The biggest defeat for ACTA came in the LIBE committee, where the proposal that ACTA did not comply with the EU Charter of Fundamental Rights passed 36-1 with 21 abstentions. Their concern, stated in the EU press release on the topic, noted that any agreement should “ensure full respect for private life or full protection of sensitive personal information” and that “ACTA entails various layers of ambiguity” where fundamental rights are concerned.

One last committee, the Third World Development Committee (DEVE) is left to give their recommendation, which will happen June 4th. INTA is due to make their own vote on June 21st, before it then goes to the full Parliament in early July, which Rick Falkvinge has termed the “end-of-level boss fight”

These three votes may not be a knockout punch yet, but they increase the likelihood of the EU rejecting ACTA, which could leave it dead in the water.