Even Fake Leaks Can Help in Hollywood’s Anti-Piracy Wars

On Monday 15 May, during a town hall meeting in New York, Disney CEO Bob Iger informed a group of ABC employees that hackers had stolen one of the company’s movies.

The hackers allegedly informed the company that if a ransom was paid, then the copy would never see the light of day. Predictably, Disney refused to pay, the most sensible decision under the circumstances.

Although Disney didn’t name the ‘hacked’ film, it was named by Deadline as ‘Pirates of the Caribbean: Dead Men Tell No Tales’. A week later, a video was published by the LA Times claiming that the movie was indeed the latest movie in the successful ‘Pirates’ franchise. 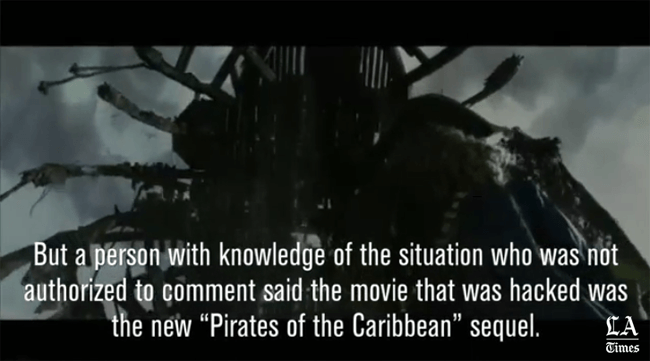 From the beginning, however, something seemed off. Having made an announcement about the ‘hack’ to ABC employees, Disney suddenly didn’t want to talk anymore, declining all requests for comment. That didn’t make much sense – why make something this huge public if you don’t want to talk about it?

With this and other anomalies nagging, TF conducted its own investigation and this Wednesday – a week and a half after Disney’s announcement and a full three weeks after the company was contacted with a demand for cash – we published our findings.

Our conclusion was that the ‘hack’ almost certainly never happened and, from the beginning, no one had ever spoken about the new Pirates film being the ‘hostage’. Everything pointed to a ransom being demanded for a non-existent copy of The Last Jedi and that the whole thing was a grand hoax.

Multiple publications tried to get a comment from Disney before Wednesday, yet none managed to do so. Without compromising our sources, TF also sent an outline of our investigation to the company to get to the bottom of this saga. We were ignored.

Then, out of the blue, one day after we published our findings, Disney chief Bob Iger suddenly got all talkative again. Speaking with Yahoo Finance, Iger confirmed what we suspected all along – it was a hoax.

“To our knowledge we were not hacked,” Iger said. “We had a threat of a hack of a movie being stolen. We decided to take it seriously but not react in the manner in which the person who was threatening us had required.”

Let’s be clear here, if there were to be a victim in all of this, that would quite clearly be Disney. The company didn’t ask to be hacked, extorted, or lied to. But why would a company quietly sit on a dubious threat for two weeks, then confidently make it public as fact but refuse to talk, only to later declare it a hoax under pressure?

That may never be known, but Disney and its colleagues sure managed to get some publicity and sympathy in the meantime.

Publications such as the LA Times placed the threat alongside the ‘North Korea’ Sony hack, the more recent Orange is the New Black leak, and the WannaCry ransomware attacks that plagued the web earlier this month.

“Hackers are seizing the content and instead of just uploading it, they’re contacting the studios and asking for a ransom. That is a pretty recent phenomenon,” said MPAA content protection chief Dean Marks in the same piece.

“It’s scary,” an anonymous studio executive added. “It could happen to any one of us.”

While that is indeed the case and there is a definite need to take things seriously, this particular case was never credible. Not a single person interviewed by TF believed that a movie was available. Furthermore, there were many signs that the person claiming to have the movie was definitely not another TheDarkOverlord.

In fact, when TF was investigating the leak we had a young member of a release group more or less laugh at us for wasting our time trying to find out of it was real or not. Considering its massive power (and the claim that the FBI had been involved) it’s difficult to conclude that Disney hadn’t determined the same at a much earlier stage.

All that being said, trying to hoax Disney over a fake leak of The Last Jedi is an extremely dangerous game in its own right. Not only is extortion a serious crime, but dancing around pre-release leaks of Star Wars movies is just about as risky as it gets.

In June 2005, after releasing a workprint copy of Star Wars: Episode 3, the FBI took down private tracker EliteTorrents in a blaze of publicity. People connected to the leak received lengthy jail sentences. The same would happen again today, no doubt.

It might seem like fun and games now, but people screwing with Disney – for real, for money, or both – rarely come out on top. If a workprint of The Last Jedi does eventually become available (and of course that’s always a possibility), potential leakers should consider their options very carefully.

A genuine workprint leak could prompt the company to go to war, but in the meantime, fake-based extortion attempts only add fuel to the anti-piracy fire – in Hollywood’s favor.