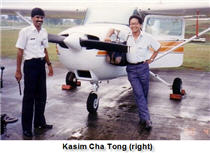 Kasim Cha Tong made a name for himself as deputy regional director of the IFPI, tackling music piracy in the 1980’s. Tong was also a director of the MPA, leading many anti-piracy operations. He gained respect from the US music industry for his efforts with the Malaysian Anti-Corruption Agency, where he worked to support the rights of foreign musical artists.

On Monday night, 56 year-old Tong, now a leading lawyer, was having dinner in a Sungai Golok border town restaurant with friends, but when he left he was killed by a single shot from an assailant with a sawn-off shotgun. The killer then fled on a waiting motorcycle, with some reports suggesting two men were involved.

Ruling out robbery as a motive for the attack, deputy police chief Seman Wan Salleh said that he believed the killer was eating in the same restaurant as Tong, although the pair had no contact while they were there and no immediate incident prompted the attack. Police are looking into the possibility that this was an assassination.

A former policeman, Tong could’ve made enemies in many areas of his work, but commercial piracy is big business in his part of the world and attracts people prepared to take action direct action to protect their business.

MPA anti-piracy pooches, Lucky and Flo, found themselves under death-threat earlier this year, after they were involved in a major operation that netted around $3 million worth of pirate discs and burning equipment. The threats from the crime syndicate involved were taken seriously, with the Malaysian government taking steps to protect the dogs. This year, another anti-piracy dog, Manny, died under mysterious circumstances.

Divorced two years ago from his wife Irene, Tong leaves two sons and a daughter.