When the pirate streaming box hype reached new heights early 2017, the third-party Kodi add-on “Exodus” was at the center of the action.

Exodus was widely praised as one of the most useful add-ons to access streaming video. This included many pirated movies and TV-shows.

The open source software was maintained by “Lambda,” one of the most prolific developers in the community. However, this meant that when rightsholders started to tighten the screws, Exodus became one of the main targets.

It all started when the popular add-on repository TVAddons mysteriously disappeared. Since Exodus was distributed through the repository, many people experienced trouble updating it.

Initially, it was unknown what was going on with TVAddons but when the site returned more than a month later, it became clear that it was being sued by Bell Canada, TVA, Videotron, and Rogers. This complaint also listed Exodus, alongside 17 other add-ons.

Not much later, development of the Exodus add-on was discontinued. This meant that from one day to another, millions of users found out that their pirate streaming boxes had become useless. At least, in their more recent configuration.

It didn’t take long before others stepped up to fill this void. Interestingly, many of the Exodus alternatives were based on the original Exodus code, which was open source. Even today, nearly two years after the add-on was discontinued, its code lives on.

TVAddons recently published an overview of the various Exodus ‘forks’ that are still online today. 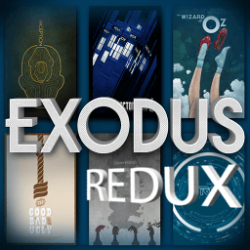 The top one appears to be the aptly named “Exodus Redux,” which is available through GitHub and maintained by a developer known as I-A-C.

However, there are many more add-ons based on the same code. This includes “Yoda,” “Exodus 8,” “Overeasy,” and “13Clowns,” to name a few. All of these allow users to stream video through an easy-to-use interface.

While the open source code is easy to fork, these add-ons can’t operate with complete impunity, of course. Several other Exodus based add-ons have already been discontinued, often following pressure from groups such as anti-piracy group ACE.

The Covenant add-on, developed by Team Colossus, threw in the towel after one of the main developers received a house visit, for example,. The Placenta add-on was discontinued following a cease and desist letter.

This begs the question: if new forks keep appearing, does it mean that rightsholders’ actions are futile?

According to TVAddons, which has banned these forks from its own platform, takedown efforts may help in the short term. However, when open source software is taken down, many alternate versions usually pop-up.

“The Rights holders efforts to destroy dual-use technologies seem to be effective in the very short-term. However, those enforcements only result in software and tools being spread out in a way that becomes uncontrollable in the long term, as we’ve seen with Kodi addons,” a TVAddons spokesperson told us.

In theory, this is indeed true. TVAddons listed just seven active Exodus forks, but there are many more out there. It’s a problem that’s hard to eradicate.

However, the continued efforts from rightsholders to shut down these add-ons may have a more subtle effect. While hardcore pirates will always find a new fork, there’s also a group of people who will get frustrated by the repeated shutdowns, and give up eventually.

If we take a look at the popularity of the Google search term “Kodi add-ons” we see that interest started to drop after the major enforcement efforts started. This may be a coincidence of course, but it could also be a sign of people giving up.

It’s hard to deny that open source software can’t be easily eradicated, but the ease of access also play a role.

We’ve also seen that with other popular open source applications, such as Popcorn Time. When one of the most popular forks was taken out following pressure from Hollywood, others remained available. Still, as time went on, interest began to wane.

Similarly, when Limewire shut down years ago, the Frostwire fork remained available. However, this never reached the same audience as its predecessor.

All in all, it’s safe to conclude that, while Exodus has left the scene a long time ago, its code still thrives. Whether the total audience is still as large as it once was, remains a question.