ExtraTorrent Down Due to Connectivity Issues

Over the past few hours ExtraTorrent has been unreachable via its extratorrent.cc domain name.

The site’s Facebook page claims the issues are due to an ISP blockade. However, this is unlikely to explain the worldwide outage unless they are referring to the site’s own hosting provider or domain registrar.

“Can’t load Extratorrent.CC ? Some ISPs blocked the website and restricted access to EXTRATIORRENT.CC domain name. We trying to resolve it!,” the status message reads.

TorrentFreak has asked ExtraTorrent staff for some additional details, but we have yet to hear back from them.

For now the site’s IP-addresses, such as http://195.144.21.16/, are still up and running. Various ExtraTorrent proxy sites, including extratorrentlive.com, work just fine too.

From what we have seen so far ExtraTorrent’s issues appear to be DNS related. The site has updated its nameservers today, but at the time of writing the domain name is not resolving to an IP-address.

Considering that the servers remain operational, it’s probably only a matter of time before the extratorrent.cc domain, or a new alternative, is back up.

Update: After roughly half a day the ExtraTorrent domain is working again. There are still some issues as the static files such as images are not loading everywhere.

Update: ET informed us that they had issues with their hosting provider. They switched DNS but that doesn’t propagate immediately, hence the downtime issues. 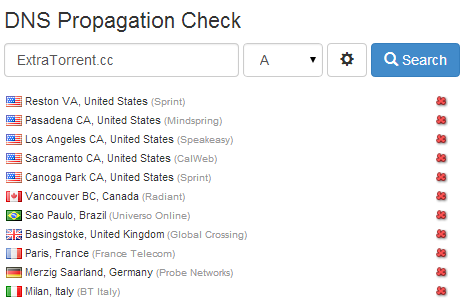