As more and more westerners become hooked on Japanese film and television animation, the astronomic rise of anime has been a sight to behold in recent years.

This growth in interest has been mirrored by increased traffic to pirate sites, as fans seek to get their fix without paying for the privilege. But what if there was a way to view anime without paying?

That is the promise of Anime Tube, a brand new Kickstarter project that shares its name with an app that rose in popularity several years ago due to the availability of pirate content in its indexes. That app is also referenced on the Anime Tube Kickstarter with three glowing reviews. 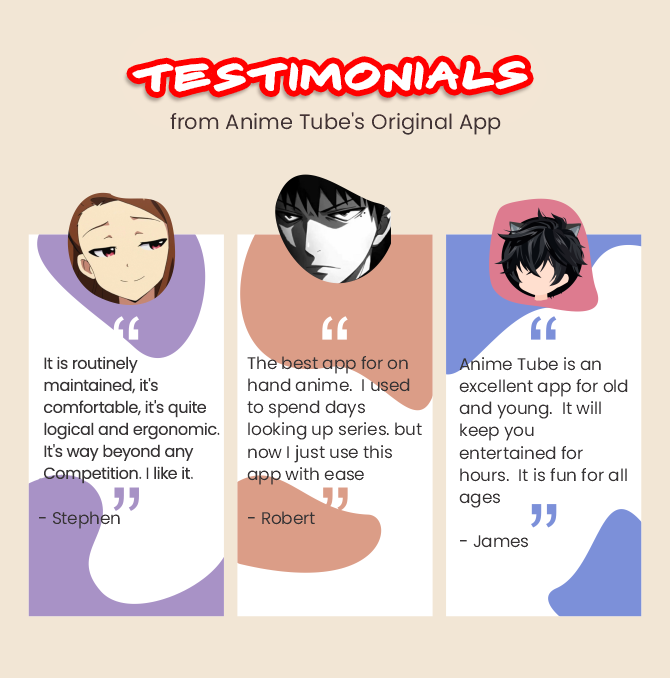 Earlier this week, Anime Tube posted a cartoon frame to Twitter, part of a collaboration with the respected Merryweather Comics. As the image below shows, it was all about promoting the new Anime Tube app as an alternative to pirate downloads while avoiding the claimed dangers of illegal sites. 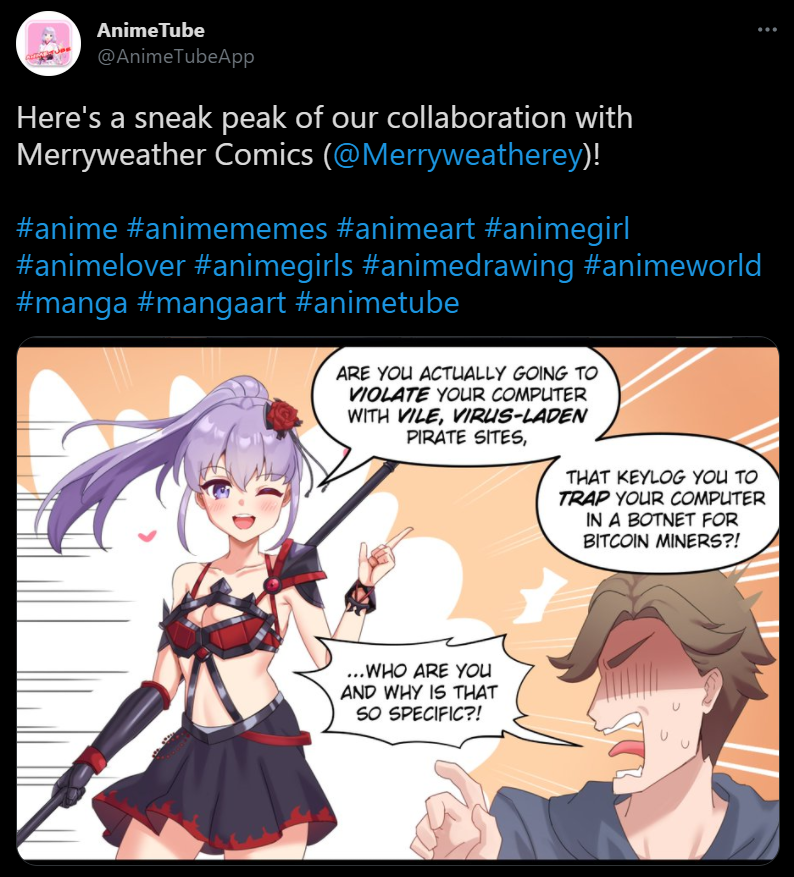 Interest was considerable. After Anime Tube posted its Kickstarter, the fund-raising platform elevated it to “Project We Love” status.

Merryweather Comic’s team also made Anime Tube an advert and uploaded it to YouTube, something that helped Anime Tube reach its $50,000 goal in under two hours. 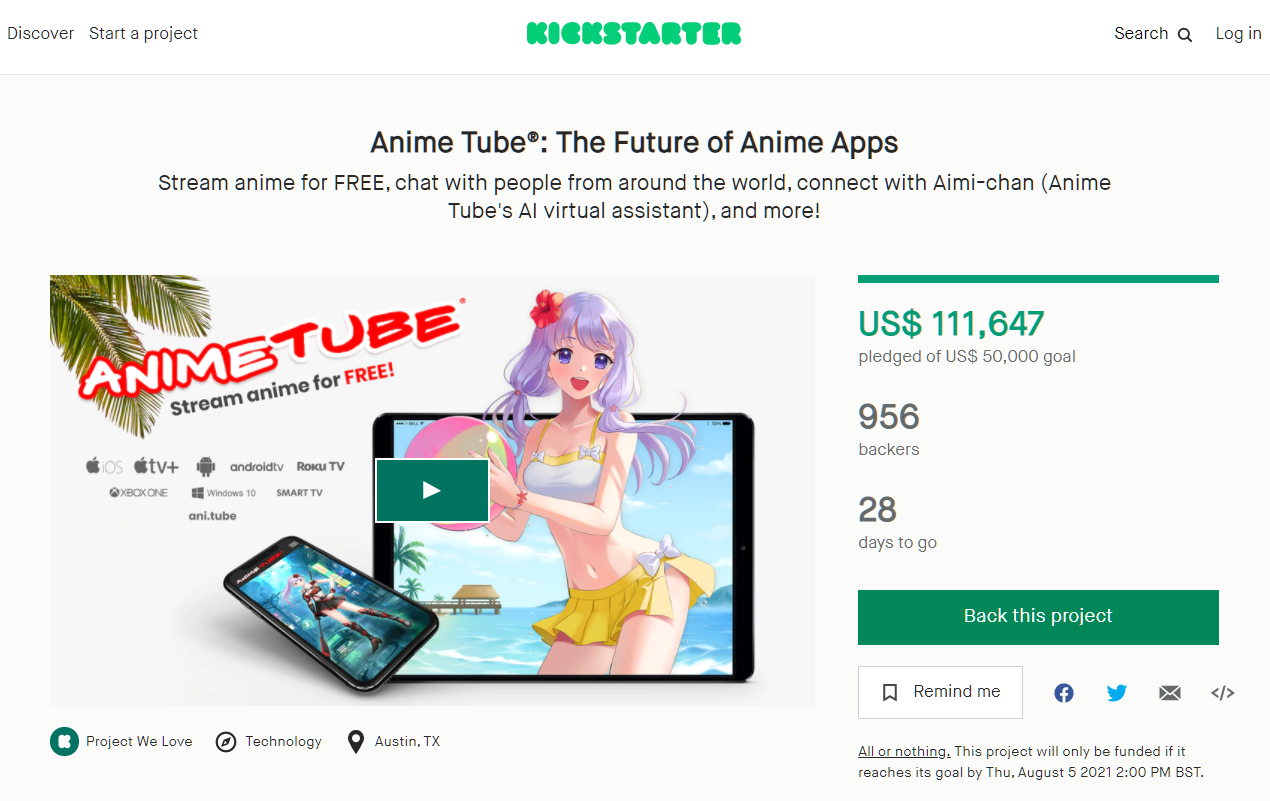 At the time of writing, Anime Tube has in excess of $111K in pledges but for reasons that are becoming all too painful, the project now appears to be under considerable negative pressure.

While Anime Tube promises to give fans anime for free, that is only part of the offer. When digging into the Kickstarter it appears they are working towards an ad-supported model, underpinned by users who pay a subscription. While this might be an acceptable proposition for many, the first problem appears to be a distinct lack of content.

Indeed, Anime Tube says it doesn’t know what content it will have available and as such touts different subscription rates based on its licensing successes, none of which are listed. If it manages to get 100 shows, it would charge $0.99 per month, for example.

This lack of content appears to have flown past most of the Kickstarter contributors as a non-issue but those with more experience seem to have recognized that a target of just $50,000 wouldn’t go anywhere near funding the licenses for even a modest range of content.

Another red flag was that Anime Tube said it couldn’t even say which regions it would support due to licensing issues, meaning that contributors could find themselves unable to use the app.

Unfortunately, Anime Tube then decided that anyone calling them out on social media, where they have the necessary control, wouldn’t be able to voice their opinions over the questionable claims being made. For what appear to be counter-productive reasons, dissenters found themselves blocked, with Anime Tube offering the following explanation:

“Why did you block me on social media?” the project wrote on Kickstarter.

“Because we do not have time for negativity and trolls. We are here to make the best damn anime app on the planet, trolls and negative people are just trying to get in the way. If you believe in what we are trying to do, then support our campaign, otherwise find someone who wants to listen to you!”

Wheels Start To Fall Off

During the last couple of hours, the advert made by Merryweather Comics to promote the project was suddenly made private on YouTube. The reasons for that are made clear on the Merryweather Twitter account where it is revealed that the artist and his friends have withdrawn their support for the project.

This morning I woke up to several of my industry friends telling me this would be a mistake supporting, and I trust them. Therefore, we have refunded the sponsor money they gave us, and I am currently taking down all posts and videos, and forwarding this message.

“It was our first offer to do a sponsored comic, and the money was honestly pretty good. Our team and I looked into it, and found while we thought it was a very ambitious project, we expected outside investors to cover costs, not just Kickstarter money” Merryweather continues

“In the future we will make sure to research properly the projects we support. We have never done sponsored comics like this in the past, it was very new to us, and I think we should have looked more into it beyond just assuming it’s an ambitious project run by some friendly people. I’m sorry guys,” Merryweather concludes.

While there is no trace of the text on the Kickstarter now, Anime Tube previously published a list of titles that were allegedly part of its licensing discussions. That was news to at least one company that took to Twitter to ask why they knew nothing about such negotiations, nor why the content of many other leading producers’ content was also listed.

@Funimation @SentaiFilmworks @GhibliUSA @VIZMedia @ToeiAnimation
Any of you familiar w/AnimeTube? Seem to have lots of our titles listed/representing in negotiations to acquire for their KS streaming project. I didn’t license them or have any discussions. Anyone?

According to follow-up tweets, Anime Tube responded but then deleted its tweet. A screen capture shows that the threshold for being in “discussions” might be fairly low.

Here is their now-deleted response: pic.twitter.com/5YgNIXKPIN

Where the project will head from here is unclear. However, what the problems above appear to show is that having a cool app is only part of the problem – without content and licensing, providing a legal service is completely impossible.