As our articles in recent weeks have revealed, when browsing some of the world’s most popular streaming sites it’s becoming increasingly likely that visitors aren’t using the real deal.

Operators of streaming portals have not only been trying to come to terms with having their domains hijacked, but also the discovery that ‘rogue’ sites are operating which are identical copies of their own.

While this is causing obvious problems, TorrentFreak is informed that there is another serious situation developing behind the scenes. At the same time as streaming portals are being cloned, file-hosting sites are also being copied and passed off as the real thing.

Three separate site owners directed us to look at Vodly.to, a site that is currently trying to pass itself off as LetMeWatchThis / 1Channel. If we click on any movie link we are directed to a download page which lists many well known file-hosting sites as sources. The problem is that while they all look like the real deal, many are in fact cloned and faked sites.

But perhaps the most recognizable is the copying of Putlocker. The correct domain, Putlocker.com, is ranked the 307 most popular site in the world. However, Vodly.to is promoting Putlocker.ws, a clone passing itself off as the real thing.

Most worryingly, the fake site is pulling in a lot of traffic. From an early August standing start the site is now eating into the official site’s lead as the Alexa chart below illustrates. 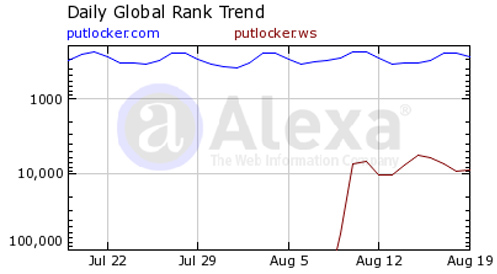 If the clones weren’t bad enough, things took a turn for the worse when TorrentFreak was contacted by the owner of a large file-hosting site who informed us he’d essentially been blackmailed by the operators of hijacked streaming links domains.

“We have received countless emails from the hijacker blackmailing us into paying them a large sum of money in order for our hosting site to remain allowed on their hijacked site,” the admin informed us.

TorrentFreak has seen the emails in question and they do indeed demand cash in exchange for remaining indexed.

The approach, we are told, causes not only problems but a moral dilemma. While it would be easy to tell an insignificant player to go away, these hijacked sites are generating an awful lot of traffic.

The question now is how admins will react to the demands. Will they pay the money in the hope of maintaining their traffic, or tell their tormentors where to go and potentially lose much more?

Only time will tell, but what we’re definitely seeing here is the unauthorized streaming sector being turned into a messy ghetto where little is what it seems. How long users will put up with that is definitely something to watch.