Over the past couple of months the PRISM scandal has dominated the news, with many people calling for stronger privacy protections as a result.

While it may not come as a complete surprise that nearly all communications on the Internet are being monitored and stored, the revelations have brought discussion about Internet privacy to the mainstream.

As a result, privacy-centered Internet services such as the search engine DuckDuckGo and email provider Hushmail have seen a surge in traffic. New data shows that the same is also true for VPN service providers.

Earlier this month IVPN ran a survey among 1,054 new customers, quizzing them on their motivations to sign up. The results below show that the PRISM scandal was the most mentioned reason with 28%, followed by several anti-piracy initiatives with 22% in total and the Patriot Act (11%).

Reasons to buy a VPN subscription 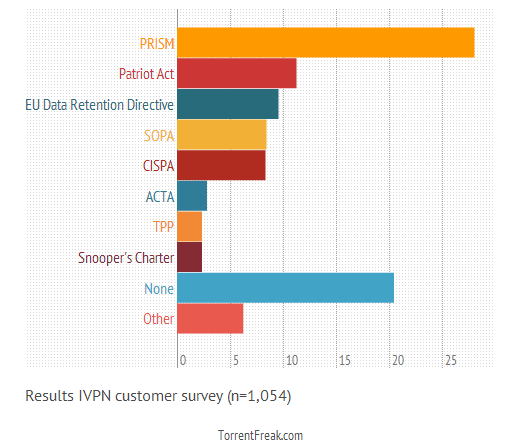 The mention of the anti-piracy initiatives SOPA, CISPA and ACTA is noteworthy. They all failed to pass more than a year ago, but are still widely mentioned as reasons to buy a VPN. For many, they are probably seen as a synonym for anti-piracy laws in general.

In addition to leading the survey results, IVPN says that the PRISM controversy also resulted in a new subscriber surge. The VPN provider reveals that they enjoyed a 56% increase in sign-ups during June and July. While this is a pretty significant bump, they’re not the only ones to have noticed a boom in business.

Ipredator informs TorrentFreak that they have seen a few spikes in their signups, and Private Internet Access reports a clear increase in demand that may be attributed to NSA spying.

“The PRISM reports are bringing to light the horrendous privacy issues that have existed on the internet. It is clearly the time for cypherpunks to take action,” Andrew Lee of Private Internet Access says.

Privacy.io‘s Derek Spranger tells TorrentFreak that they have noticed an increase in interest, but that a VPN certainly isn’t the holy grail when it comes to NSA-type surveillance.

“Based on emails we have received, a lot more people have been referencing the NSA, but a VPN isn’t the solution to get away from PRISM. The issue isn’t data coming from you, but where it lands.”

“I know I should be plugging the company, but in relation to this it’s not correct,” Spranger adds.

IVPN also notes that while a VPN will hide your browsing and download habits, it’s not going to prevent the NSA from reading your email messages or listening in on your Skype conversations.

“Obviously using a VPN or TOR is not going to stop the NSA from reading your Gmail inbox, so in a technical sense, using a VPN specifically to counter PRISM isn’t going to work.”

“At least the mass media coverage of PRISM appears to be pushing the idea of online surveillance into the public consciousness on a much larger scale than previous controversies,” IVPN adds.

The best solution for privacy concerned citizens who want to escape mass-monitoring is not to use the Internet at all, and throw out the phone too. However, for most people that’s not really an option anymore.