The UK’s Department for Business, Innovation and Skills have just released their annual IP crime report. The document concentrates mainly on physical counterfeit products but also lists events concerning file-sharing and the activities of the IFPI, BPI and FACT, and the state of their cooperation with the authorities.

While much of the report, which covers 2010-2011, is dedicated to physical product such as counterfeit CDs, DVDs, clothing, alcohol and tobacco, there are some sections concerning familiar name anti-piracy groups, camming and online file-sharing which will be of interest to TorrentFreak readers.

The high-profile file-sharing conviction of Scottish nurse Anne Muir is detailed. The report notes that the BPI gathered the intelligence in the case and subsequently passed it to the Intellectual Property Office’s ‘Hub’ in order to establish her real-life identity. According to the report, ‘The Hub’ manages the national IP crime Intelligence Database (IPID) and was created to coordinate law enforcement and representatives from industry, in this case the BPI.

The case of 22-year-old Emmanuel Nimley appears in the report for his camcording activities in 2010. Nimley received 6 months in jail for recording movies including The Bounty Hunter, Alice in Wonderland and Green Zone and subsequently uploading them to the Internet.

Readers will be familiar with FACT, the Hollywood-funded Federation Against Copyright Theft. The group, which has previously helped in raids against TV-Links and BitTorrent site FileSoup, features prominently in a section on product seizures. As can be seen from the surprising table below, they don’t limit themselves to seizing just DVDs and CDs.

Very often the Trading Standards agency gets involved with file-sharing issues in the UK, particularly in operations concerning FACT. The chart below shows the products investigated by Trading Standards in 2009/10 and 2010/11. Note the drop in DVD investigations but a boost in online streaming enquiries. 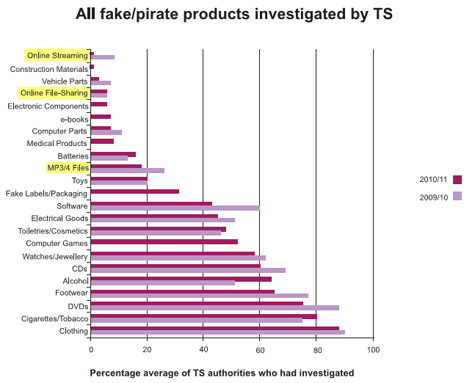 Trading Standards carry out their work with partners, such as those in the music, movie and games industries. The chart below shows that FACT, BPI and the games industry’s UKIE (previously ELSPA) have all reduced their levels of collaboration on the previous year’s. However, work with IFPI has increased by 50% and PRS by just over 40%. 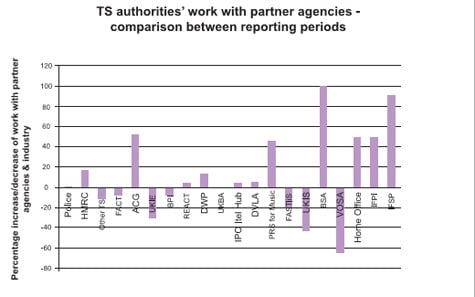 Another interesting statistic from the report concerns proactive monitoring of the Internet. Of the 85 anti-piracy authorities who responded, 70% said they carried out online monitoring. 58% said they track auction sites, 47% said they monitored ‘other’ online market places but only 3% admitting monitoring P2P uploaders.

The full report can be downloaded here (PDF).