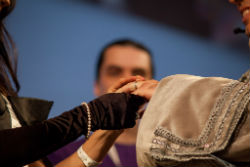 All around the world file-sharers are being chased by anti-piracy outfits and the authorities. But while copyright holders are often quick to label file-sharers as pirates, there is a large group of people who actually consider copying to be a sacred act.

To emphasize the holiness of copying, philosophy student Isaac Gerson started the Church of Kopimism in Sweden. After a rough start with two failed applications, the new religion was finally recognized by the authorities in January.

For a church that holds CTRL+C and CTRL+V as sacred symbols it is no surprise that the word of this new religion spread quickly. In recent months it expanded globally, from the United States to Estonia. All followers believe that copying and sharing is the most beautiful thing in the world.

This belief in sharing is not restricted to files, code and information, but also applies to love. It was only a matter of time before the first Kopimist couple would become married, and last weekend this joyful union took place at the Share conference in Belgrade.

On stage, a Romanian woman and an Italian man were joined in a holy Kopimist act. Both promised to share the rest of their lives together and to uphold the highest sharing standards.

The Church was delighted to bring the news and commented: “We are very happy today. Love is all about sharing. A married couple share everything with each other.”

Like any other matrimony, a Kopimism marriage is bound by rules. The Church of Kopimism allows the couple to share their love with others, as long as those others don’t steal it. Most importantly, however, they have to copy and remix themselves.

“Hopefully, they will copy and remix some DNA-cells and create a new human being. That is the spirit of Kopimism. Feel the love and share that information. Copy all of its holiness.”

Or to put it in the words of another famous religion.