Filmmaker Schools Pirates On Correct Way To Rip His DVD

Jason Scott is not your average filmmaker. As the creator of textfiles.com, which hosts archive files from historic bulletin board systems (BBS), he has documented the Internet’s first steps into file-sharing.

Scott’s filmmaking is equally technology oriented. In 2005 BBS: The Documentary made its debut, and 5 years later this was followed by the interactive fiction (text adventures) film GEt Lamp. The latter documentary was released in July 2010, and in common with most films nowadays it has also been ‘pirated’.

The scene release group FLAiR released their DVDRip of lamp just a few days ago, and what followed was an interesting and highly unusual ‘conversation’ between the filmmaker and FLAiR. 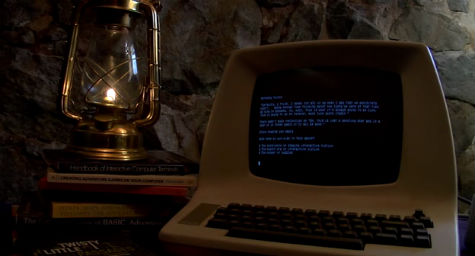 A story like this is best told by the people involved of course, so let’s skip to the good part. It started with the flattering description of Jason Scott in the NFO file released by FLAiR together with the DVDrip of Get Lamp.

Jason Scott is a pretty damn awesome guy. For 12 years he has run textfiles.com, an irreplaceable library of well over fifty thousand textfiles, collected from the golden era of human kind, the 1980s. Before the dawn of the World Wide Web, unless you belonged to the exclusive group that had Internet access through your university, your primary source of information would be such textfiles, downloaded from your local BBS. Usenet, Gopher, Archie, none could measure up to the popularity of the BBS.

Not only did FLAiR make it clear that they are fans of Scott’s work, they also encouraged downloaders to buy the full DVD of the film. For this very reason the scene release group explicitly left out the DVD extras from their release.

As is common with Jason Scott releases, the DVD is packed with extras, yet we’ve chosen to include none of them. Why? Because he deserves your money, that’s why! Because there’s no greedy corporation behind this, no corrupt distributor, no MPAA no nothing. Because this guy curses digital data lobotomy as much as you do, because he *let* you download this film, because we wanna see what he’s able to do next. If you only buy a single DVD this year, let it be this one.

The comments from FLAiR didn’t go unnoticed by Jason Scott, who described them as “heartwarming” in a recent blog post titled “To My Esteemed Colleages at FLAiR.” However, Scott wasn’t too happy about all aspects of the release, and wrote the following.

I’ve just downloaded the torrent, and while the image quality and sound quality is excellent, you’ve made a mistake.

The DVD, as I’ve mentioned before, is interactive with a non-interactive version as well. To accomplish this and save space on the DVD (since it’s packed with stuff), I have a set of discrete tracks that are either summoned (via the interactive choice) or played as a playlist (via the non-interactive choice). Unintentionally (and I do really mean it, it was unintentional), this has made the movie a tad harder to rip, because the movie is in pieces scattered throughout the DVD, and not in any obvious sequential order.

Playing the AVI that FLAiR has released shows that you have ripped only some of the tracks, and ripped one extra one that shouldn’t be in there.

Scott then pointed out what the correct order of the scenes should be. In addition, he pointed out that as an appreciation for his efforts a ‘fix’ from FLAiR might be in order. After all, they ruined his creative work.

While, again, I am pleased you wrote such kind things about me, this mixed-up version makes it look like I made a flawed DVD with doubled scenes, and takes away the entire puzzle sequence, which I am rather proud of.

Please fix, if you can

And so it happened. FLAiR read Scott’s comments and yesterday they came out with a Repack of the DVDRip, fixing the mistakes that were pointed out to them by the filmmaker. In addition, they offered an apology.

Sorry for screwing up your film – we really didn’t mean to, and you deserve better. Please accept our apologies, along with this repack, which should restore the missing bits, and put things back in order. Hope we got it right this time, but if not, by all means do let us know.

Get Lamp can be downloaded for free at most torrent sites near you. Since it’s released under a Creative Commons Share-alike license you’re not breaking any laws by downloading it either. Those who want to have the full experience and all the awesome extras can order a DVD through the official site.