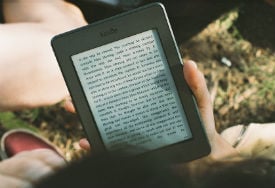 While millions of people have no qualms about downloading music, movies and TV shows for free, there are also large numbers of students who feel completely justified in obtaining textbooks without paying for them.

With often extortionate pricing and a requirement to obtain the latest but only slightly modified versions of books to complete their courses, some students believe that textbook publishers fail to act in their bests interests. As a result, many turn to free or cheaper sources and there is no shortage of people prepared to help them with that.

Unfortunately for the suppliers, that doesn’t always go to plan.

Last week, Rights Alliance reported on the case of a former student in her late 20s. According to the Danish anti-piracy group, the woman had been selling pirated copies of eBooks on a number of online platforms without obtaining permission from copyright holders.

The woman is a former student in the social worker program at the Via University College in Aarhus and between January 2018 and April 2020, she reportedly sold digital copies of syllabus books she used in her social worker education. When compared to the level of offending on pirate sites, the woman’s crimes were relatively small – 38 different textbooks were sold in 110 transactions – but that was enough for Rights Alliance to make a criminal referral.

In the fall of 2019, Rights Alliance referred their investigation to the State Prosecutor for Serious Economic Crime (SØIK), providing evidence of the woman’s “systematic offering and sale” of pirated digital books. SØIK determined that there was a case to answer and on September 2, 2021, there was a court hearing where the woman’s guilty plea was heard.

During a hearing yesterday, the court in Aarhus convicted the former student for violating the Copyright Act. She was sentenced to 20 days probation and the court determined that the amount she turned over due to the sales of the books (DKK 9,383 / US$1,494) should be confiscated.

“In short, copying e-books is illegal if you do not own the rights to them. It is an aggravating factor that a significant number of sales have taken place and that this happened over a long period of time,” says prosecutor Simone Jeppesen.

“The convict has now received a punishment for violating copyright law, and thus has a stain on her criminal record. A relationship that may matter to her for many years to come. Therefore, it is important to understand that even though it is easy to do so, it is a criminal offense to copy e-books without the permission of the author.”

A release from the court notes that SØIK, on ​​behalf of the members of the Rights Alliance, submitted a claim for compensation of DKK 10,000 (US$1,592), which the woman must now pay in compensation.