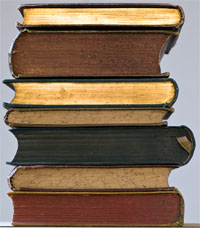 There are countless complaints about the catch 22 situation of needing money to continue, but no job yet to provide it. One of the unavoidable major expenses faced by most students is compulsory spending on textbooks.

“According to a study (pdf) conducted by the Bureau of Labor Statistics, textbook prices have increased FOUR TIMES the rate of inflation of other finished goods for the period of 1990-2009,” the admin of LibraryPirate.me [LP] told TorrentFreak this morning.

LibraryPirate was founded a little over a year ago with a site mission of providing college students with an alternative to continuously rising textbook prices.

“Our mission is simple and specific,” LP’s admin explains. “To revolutionize the digital e-textbook industry and change it permanently.”

LibraryPirate’s founder believes that real-world business rules don’t apply when it comes to textbook pricing and he bemoans the often unnecessary annual updates that render last year’s textbook obsolete, just as this year’s version – with its 6% annual price uplift – becomes the dictated ‘choice’.

“The Government Accountability Office reports that the average student spends about $1000 on textbooks each year, or 26 percent of their yearly tuition [source, pdf]. Publishers defend their actions claiming increased expenses in updating this supplementary material are only being passed along to the student,” he explains.

“While there is a need to keep information current, most of what is taught in big introductory courses simply isn’t going to change that much from year to year, or even from decade to decade. For example, Calculus was invented 300 years ago however new editions of textbooks are released like clockwork.”

In common with the music and movie industries, a relatively small group of textbook publishers have a monopoly on the market. Even congressional intervention is said to have failed in dislodging their grip.

“New Textbook legislation was introduced by the Higher Education Opportunity Act (H.R. 4137), which passed 380-49 in the House and 83-8 in the Senate on July 31. The bill was signed by President Obama on August 14 and went into effect July 1, 2010,” LP’s admin explains.

“The bill aims at making textbook publishers more up front with students about textbook pricing and also forces them to sell some additional course materials separately. While this is a start, it is clear now that these measures have done nothing to prevent the continued rise in inflation of textbooks and new digital course material.”

Furthermore, as is becoming increasingly common in the video games market, publishers are taking steps to discourage student use of the pre-owned books market. LP’s admin says they are achieving this by offering discounts up to 20% on their eBook products to encourage uptake, but then disqualifying the purchaser from selling the product by implementing DRM.

But LP’s admin, who says that he experienced the street-level effects of the monopoly during his time as a student, intends to undermine it through what he describes as the open access movement.

“Open source textbooks alone will, without a doubt, turn the textbook industry on its head by taking away the power from the major publishing companies,” he explains.

“Those with access to e-textbook resources — students, librarians, scientists and professors have the responsibility to share this knowledge openly with the rest of the world. Unfortunately, the majority of universities do not utilize open source textbooks today. Professors continue to require students to buy hundreds of dollars in textbooks and ‘kiss the ring’ of textbook publishers.”

This open source dream is not yet reality, which automatically leaves students in the hands of the textbook monopoly. However, LP’s admin says he intends to meet demand by making ALL textbooks open for everyone to use and distribute.

“To strike back against the textbook monopolists we must hit them where it will hurt the most – not in the testicles, but in the pocketbook,” he says. “Tell all your friends not to buy books from the campus bookstore when they can get them for free online. ”

While there are currently around one thousand textbooks indexed on LibraryPirate.me, the site’s founder hopes that through collaborative effort that collection will grow.

“Grab every textbook you can get your hands on and scan it so that everyone in the world can have a chance at education,” he says. “Professors, students, and avid readers alike, it is our responsibility to do everything we can to make education available to all who seek it, and this policy flies directly in the face of the textbook publishers that are using you to line their pockets.”

While many users of torrent and other file-sharing sites will simply be looking for casual digital entertainment to fill their free time, the careers of those searching for textbooks could hang in the balance depending on whether they find their target material or not.

But of course, just as poor students want to save money on their way to a career, textbook publishers need to make money in order to survive too. Is there a moral difference between downloading a song or movie and downloading a career-enabling educational textbook, even if it is provided at unfair prices through an anti-competitive monopoly?

“While many may view the open source movement as blatant ‘piracy’, I believe they are overlooking the obvious moral imperative at play here,” TorrentFreak was told. “Personally, this notion became very clear to me after attending college and has remained the driving motivation behind the LibraryPirate project.”

“It’s no secret that college students today are simply victims of a broken educational system. Until real steps are taken to ensure textbook material is made more affordable and accessible to students, I only see one path to moral high ground.

“So, in the historical tradition of civil disobedience, the time has come for students to declare their opposition to this private theft of education,” LP’s admin concludes.