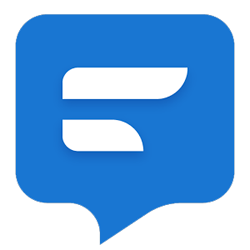 Millions of Android apps are downloaded from the Play Store everyday which is hardly a surprise given the huge choice and massive userbase of the Google platform.

Many Android users happily go through life without spending a penny on software, mainly because there are adequate free or ad-supported versions available for many top titles.

Of course, millions of users prefer to bypass Google Play altogether by installing raw .APK files from third party sources. With this option they lose the convenience of Google Play but gain the ability to install premium software without paying for it, potentially at the risk of malware.

Strangely, not only do people pirate premium titles but they also pirate free software too. Case in point, Textra SMS from Delicious Inc. Self-described as a “seriously beautiful, feature rich SMS and MMS app”, Textra SMS is a smash hit having been downloaded between five and ten million times according to Google.

Nevertheless, plenty of people are installing Textra from third-party sources, largely to remove the ads that allow the software to be offered for free. However, those that have done so are being greeted with a surprise. Postings in dozens of locations around the web from what appear to be Textra pirates indicate that their activities haven’t gone unnoticed. 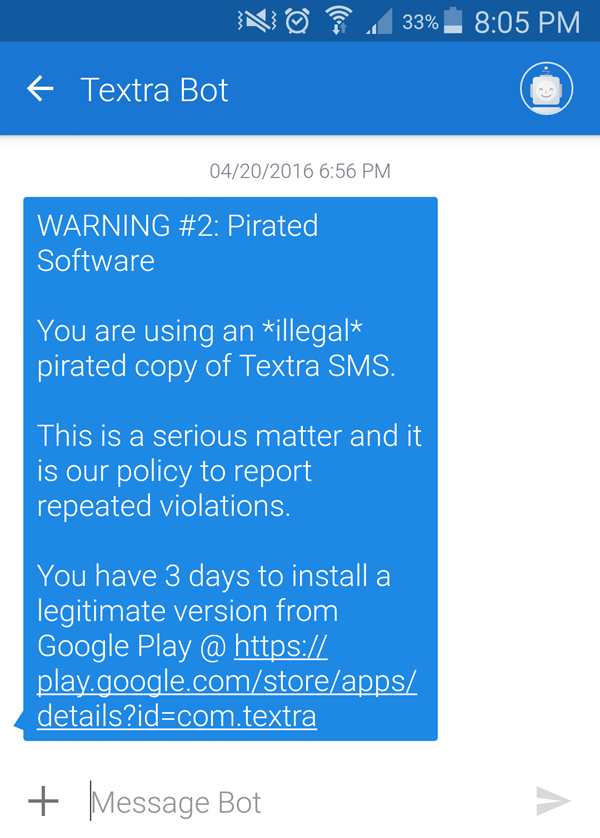 While anti-piracy notices in software are nothing new, the warning and ticking clock from Textra has a few people worried. One Reddit thread has a warning that pirating online apps is extremely dangerous.

“Pirating something that requires you to being online is a suicide mission. They will probs send a fine of $250 or something,” one commenter said, somewhat pessimistically.

This assessment is amusingly over-bleak but it doesn’t sit in isolation. In other discussions people question whether it is possible for Textra to track down pirates down through the app, whether they could be reported to their ISP, Google, and in one case even whether they could get in trouble with the police.

While finding the prospect of someone being reported to law enforcement for pirating a free app somewhat amusing, TF contacted Delicious Inc. for comment. Firstly, was the message their doing?

“Sure there are a bunch of ‘cracked’ versions of Textra available on the web. If you search on Google for cracked or pirated or ad-free you’ll find them,” Textra’s Max told TF.

“They are hacked in respect the APK has been modified and code injected to bypass the licensing checks. Periodically we check for these and send out a notification to users. Some of which may not even be aware of the fact, for example a friend downloaded it for them.”

So having established that the messages aren’t fake, we again pushed Max on the threats. The notice says that the company considers piracy a serious matter and has a policy to “report repeated violations.” It also suggests that users can avoid issues by downloading the official version of Textra from Google Play within three days.

TF asked what happens if users don’t comply with the deadline and the response we received suggests that Delicious would simply prefer that users install the official, free product.

“Legally there are a whole raft of options all the way from DMCA takedown requests to civil proceedings. It’s not a big issue for us, but on occasions we try our best to encourage users to ‘do the right thing’ that’s all,” Max said.

Of course, making absolutely sure of no action is literally just a click away (an install link is provided in the notice) and since Textra SMS is free, users have nothing to lose.

While there are probably better ways to get customers on board than threatening them, in this case it’s likely that the warning had plenty of pirates quickly installing the official version.

Textra wouldn’t be drawn on stats but it’s hard not to see pirating this excellent free app as unfair to the devs. We tested the official version and didn’t see any ads at all but apparently when they do appear they’re pretty unobtrusive.

“The app is free, so you’d wonder why a user would risk installing an APK that’s been modified (and the risks of injected code like key recorders, password sniffers etc). Why would you do that!?” Max asks.