Working in tandem with copyright holders, French authorities are cracking down hard on various pirate sites.

They have managed to shut down several prominent players in recent months, including the private music tracker What.cd and France’s largest pirate site, Zone-Telechargement.com.

The site was a thorn in the side of the local Association Against Audiovisual Piracy (ALPA) who reported the site to law enforcement. This prompted the desired effect, as the website’s administrator was arrested by the police last week and at the same time, the site went dark.

According to ALPA, the man admitted being the sole operator of the site through which he generated a significant amount of revenue over the past one-and-a-half years.

“The administrator of Films-regarder.co acknowledged that he had acted alone in the administration of the site and admitted having received about 200,000 euros during the last 18 months. Money from foreign advertising agencies was cashed on foreign accounts,” ALPA informs TorrentFreak. 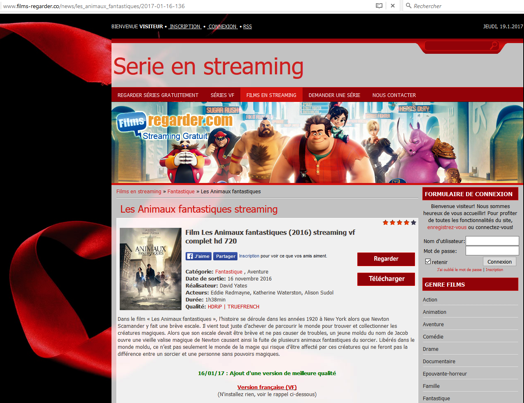 ALPA is pleased with the shutdown and arrest. According to the movie industry group, Films-regarder.co caused its members substantial financial harm.

“The damage to the beneficiaries could amount to more than 30 million euros,” the group says.

The operator went before the Public Prosecutor last Friday, who decided to open a full investigation. Meanwhile, the defendant remains under judicial supervision facing a potential jail sentence of three years as well as 300,000 euros in fines.