Last year Games of Thrones was crowned the most pirated TV-show on the Internet, and this year the same is likely to happen.

While one might expect the people who make a living off the show to complain bitterly, the opposite is true.

Many of the people connected to the show see the piracy record as a compliment rather than a major threat that needs to be dealt with. 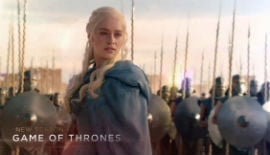 Jeff Bewkes, CEO of HBO’s parent company Time Warner can now be added to the list.

During an earnings call earlier this week he admitted that piracy is not all that bad.

When Bewkes was asked whether it can be seen as a compliment he agreed. “I have to admit it, I think you’re right.” he said.

“Our experience is that it leads to more paying subs. I think you’re right that Game of Thrones is the most pirated show in the world. That’s better than an Emmy,” Bewkes said.

At TorrentFreak we are of course thrilled that our yearly list of most pirated titles beat the Emmys….