Founded early 2010, GazelleGames quickly grew out to become one of the larger private BitTorrent trackers dedicated to games.

Before the end of its first year the site amassed thousands of members, and this number continued to increase until a surprise message was posted by the site’s owners yesterday.

After three years it’s Game Over for GazelleGames. The decision to close the site comes a few days after the closure of Underground Gamer, another popular gaming tracker. While the exact details of the closures remain unknown to the outside world, both trackers have mentioned legal threats as motivation.

In a goodbye notice posted on the site’s frontage, GazelleGames says it wants to protect staff and users from running into trouble with the law. The site also assures its members that all personal information will be wiped.

“GazelleGames will be closing its doors. This came as a surprise to all the staff team, but it’s a move not unexpected. In light of UG’s closing five months after BG, it seemed like a prudent move to keep any legal actions from being taken upon anyone.

“So yes, it’s a precautionary measure taken in reaction to the recent movements in the torrent world. All of your contact data such as IP addresses and emails will be wiped along with the server itself.” 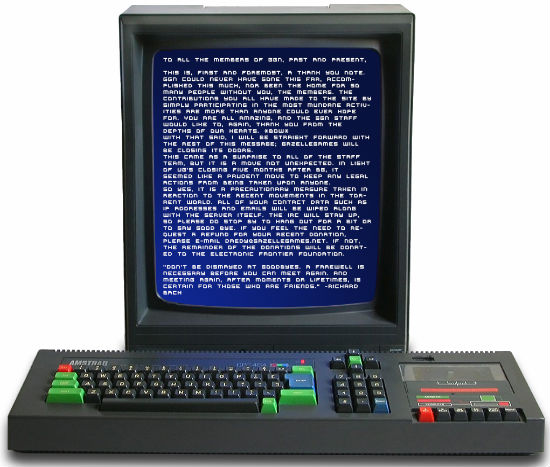 Unlike Underground Gamer, the shutdown of GazelleGames is said to be permanent. Underground Gamer is leaving the door open for a comeback but notes that all non-essential data was wiped out to protect staff and members, a fact relayed to TorrentFreak when we spoke with a tech admin at the site.

Counting in bitGAMER, this is the third large gaming tracker to shut down in a matter of months. While it’s unclear which industry group is behind the legal pressure, there have been some rumors that the Entertainment Software Association (ESA) is involved.

In an IRC chat Underground Gamer’s Lenk mentioned that there were complaints regarding games from major publishers, including FIFA 98. However, the threats came from a “watchdog,” not EA or any of the other game makers themselves.

“That’s what you get when you have organizations whose sole purpose is scoring points by taking down sites. They don’t care about what they take down. They just do what they are paid for,” Lenk wrote.

“Companies don’t care about UG. Copyright watchdogs make it their job though,” he added.

Whoever is behind the pressure, it appears to be serious enough for the two trackers to cease their operations. The question remains whether the shutdowns will stop people from sharing games.

There are already talks to re-spawn the fallen communities at new BitTorrent trackers, as is often the case when large sites die. Other members will simply resume their sharing habits at one of the trackers that are still in the game.