GitHub Warns Users Reposting YouTube-DL They Could Be Banned

On October 23, 2020, the RIAA decided on action to stunt the growth and potentially the entire future of popular YouTube-ripping tool YouTube-DL.

The music industry group filed a copyright complaint with code repository Github, demanding that the project be taken down for breaching the anti-circumvention provisions of the DMCA. While this was never likely to be well received by the hoards of people who support the software, the response was unprecedented.

Outcry Not Seen Since the RIAA Sued Users in the 2000s

When the RIAA decided it would be a good idea to sue individual file-sharers during the 2000s, the music industry group became a household name for all the wrong reasons. Famously described as ‘The Recording Industry vs The People’, the legal initiative rendered the RIAA one of the most hated groups online, with targets and their supporters recoiling at what many believed to be an abuse of power.

While the RIAA eventually parted ways with that legal strategy, the stain of those few years managed to persist but, as those who were ‘there’ moved on and a younger generation began to take their place, the RIAA’s position as a “copyright bully” began to fade away. Whether the RIAA expected it not, the move to take down YouTube-DL has reignited the online hatred in a way that took many observers by surprise.

While nowhere near the bitterness experienced online in the 2000s, the takedown of YouTube-DL caused a significant response online. Dozens of news outlets covered the RIAA’s decision and debates were ignited in tech and legal focused communities over whether the labels were justified or not. All of this only added to the interest in YouTube-DL, as data from Google Trends shows. 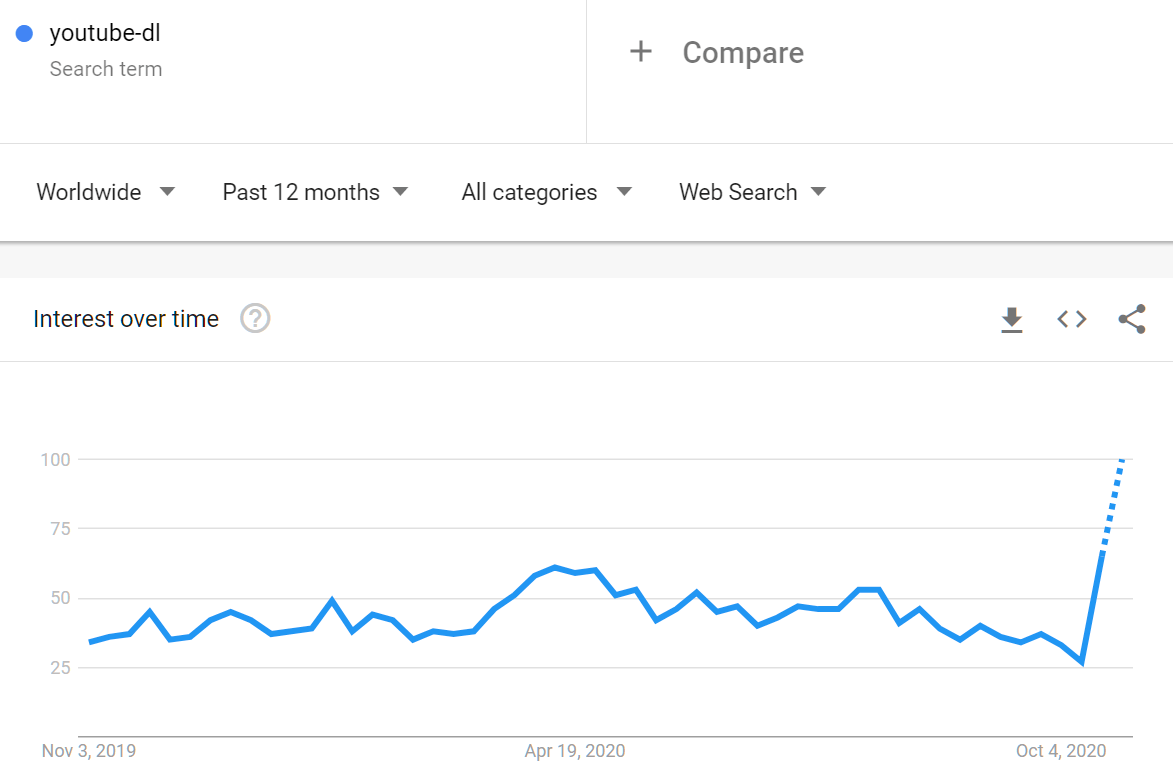 Importantly, the action also angered those who maintain, use, and support the software, plus those who didn’t appreciate the perceived overreach into the open source community. As a result, large numbers of people united to stand shoulder to shoulder.

In many instances their response struck at the heart of the RIAA’s aims: if they wanted YouTube-DL to be harder to find, activists would make it even easier. The software was mirrored, cloned, uploaded to hosting platforms and even turned into images that could be easily shared on millions of sites. This, despite the software still being distributed defiantly from its own site.

One of the responses was to repost the content to Github itself, where hundreds of YouTube-DL forks kept the flame alight. A copy even appeared in Github’s DMCA notice repository where surprisingly it remains to this day. Now, however, Github is warning of consequences for those who continue to use the platform for deliberate breaches of the DMCA.

Github Warns Users Not to Risk Their Accounts

As previously reported, Github is being unusually sympathetic to the plight of the YouTube-DL developers. Most platforms are very happy to simply follow the rules by removing content in response to a DMCA complaint and standing back while declaring “Nothing to do with us folks.” Github, on the other hand, has actively become involved to try and get the project reinstated.

Unfortunately, however, there is only so far Github can go, something the company made clear in a statement posted to its DMCA repository this weekend.

“If you are looking to file or dispute a takedown notice by posting to this repository, please STOP because we do not accept Pull Requests or other contributions to this repository,” wrote Jesse Geraci, Github’s Corporate Counsel.

“Please note that re-posting the exact same content that was the subject of a takedown notice without following the proper process is a violation of GitHub’s DMCA Policy and Terms of Service.

This statement caused an update to Github’s earlier DMCA notice advice, which now reads as follows: 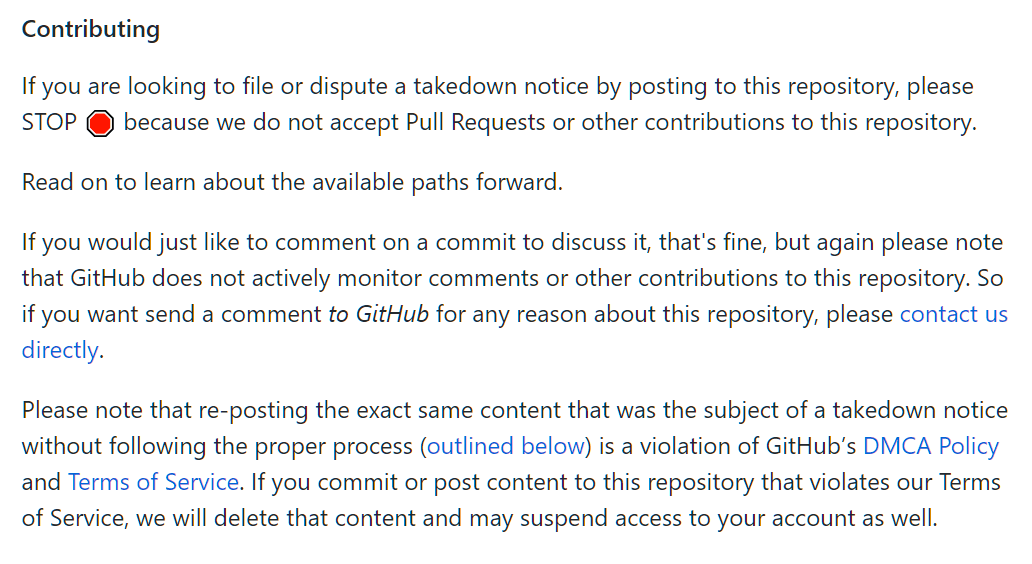 Github Has a Responsibility to Enforce a Repeat Infringer Policy

This response from Github’s legal team shouldn’t come as a surprise. While the jury is still out on whether YouTube-DL actually breached the DMCA’s anti-circumvention provisions, the platform had little choice to comply with the initial request of the RIAA.

However, while Github is clear that “Users identified in the notices are presumed innocent until proven guilty,” it appears to be drawing a clear line in the sand that continually reposting allegedly-infringing content is against the rules. In this respect, Github links to its terms of service and DMCA policy.

“It is the policy of GitHub, in appropriate circumstances and in its sole discretion, to disable and terminate the accounts of users who may infringe upon the copyrights or other intellectual property rights of GitHub or others,” it reads.

The new comments from Github’s Corporate Counsel seem designed to serve as a reminder to people who want to protest on Github itself. While dissenting commentary isn’t under any threat of a response, it appears – reading between the lines – that Github hopes people won’t continue to risk their accounts on the platform by reposting material that will only have to be taken down.

If such content is repeatedly taken down by the platform, then Github’s repeat infringer policy will need to be considered under law and as history has shown, that either ends badly for users or for platforms themselves, there is no real middle ground.