For many Android users Transdroid is the perfect remote access app for managing their BitTorrent clients on the go. The app allows users to start and stop torrents, search torrent files and even use the barcode scanner to find matching torrent files.

Transdroid offered both a free and a paid version of the app, and judging from the 400,000 downloads people seemed to appreciate it. However, as of this week, Google decided that Transdroid is no longer eligible to be placed in the Android Market.

“I have just received an e-mail from Google that Transdroid, both the free and donate version, have been pulled form the Android Market. This is due to apparent violations in the content policies of publishing in the Android Market,” Transdroid’s developer announced. 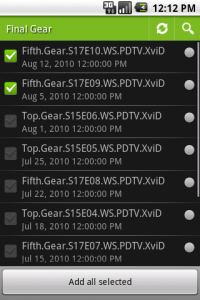 Google’s notification wasn’t very clear on what the violations were, but considering the nature of the app it wouldn’t come as a surprise if they relate to copyright infringement.

“Don’t infringe on the intellectual property rights of others, including patent, trademark, trade secret, copyright, and other proprietary rights. We will respond to clear notices of alleged copyright infringement,” the policy reads.

Although Transdroid itself isn’t infringing any copyrights, the screenshots on the app’s website do feature some copyrighted downloads which Google may see as a violation of the Android developer policy. As we highlighted previously, this is not a particularly wise thing to do.

Unlike Apple, Google is not banning everything BitTorrent related, but if developers showcase infringing uses they may see no other option that to take the app down. Even Cydia, the alternative market place for iPhone apps, is taking a harsh line on file-sharing software that ‘promote’ infringing uses.

For Transdroid, however, things aren’t completely over yet. The developer has asked Google to explain what he should change so the site can be added to the Android Market again. In the meantime the app and the source code are available as a direct download through the Transdroid website.

“Thanks to all Transdroid users for their support and enthusiasm. Let me be clear that I am happy to build a version for the Android Market that does satisfy their policies and can still help thousands of happy BitTorrent users around the world,” Transdroid’s developer says.