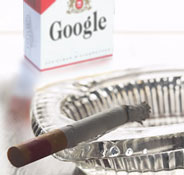 So, apparently one day Google decided that it is illegal in nearly every country of the world to host a .torrent file that (allegedly) links to infringing material. Strange, because there is no legal precedent for this decision in most countries.

The owner of SumoTorrent told TorrentFreak that he discovered that A search on Google for sumotorrent now triggers the following message at the bottom of the results page:

“In response to a complaint we received under the US Digital Millennium Copyright Act, we have removed 1 result(s) from this page. If you wish, you may read the DMCA complaint that caused the removal(s) at ChillingEffects.org.”

A search for other BitTorrent sites like Torrentspy and Torrentreactor comes up with the same message (note. the sites are still indexed but some results are removed). Strangely enough, for torrentreactor it only shows up for a search on the .com domain.

According to Google the filtered search results are caused by DMCA complaints , but the owner of SumoTorrent is a little surprised by this. He has no clue why the “content owner” didn’t contact him directly because he generally processes takedown notices within 24 hours. Unfortunately the link Google provides to the complaint in question doesn’t work, and a search on ChillingEffects.org doesn’t really help much either.

One of the few BitTorrent related DMCA complaints Google received concerned Paris Hilton’s famous . This notice was sent by Jim Salomon, the brother of Rick Salomon who used to date Paris. The complaint is hilarious, Jim even complains why it takes Google more than 4 hours to remove the .torrent in question. Funny or not, eventually Google decided to remove the .torrent file in question from their search results.

What Google has done isn’t really that revolutionary because most administrators of BitTorrent sites take down torrent files themselves upon request. However, the main reason for this is that they don’t want endless legal battles. They see it as a service to the content owners to remove the .torrent files if a decent request is made. But I kind of hoped that Google would make a stand here, wishful thinking so it seems.So what do you think? Should Google filter their results like this?