The music and movie industries love to poke the finger at Google and blame the technology giant for a world of woes, not least the appearance of ‘rogue’ sites in its search results.

Well, you know what? They’re not the only ones that can play that game.

Here at TF we do our very best to bring the latest file-sharing news to our readers and always try to bring something fresh to our reports, whether we’re the initial source or not. However, there are other sites who don’t appear to care much about the topics they cover, only the number of clicks they can generate.

I’m talking about headlines like this from the file-sharing experts at Christian Today.

“[W]ith reports saying that Microsoft’s new platform has more stringent security measures against torrents, fans are wondering if TPB and other sites will make it to Windows 10-enabled devices,” the site warns.

The article quotes fellow torrent-nonsense-farmers ‘Venture Capital Post‘ as the source, claiming that people upgrading to Windows 10 “will not have access to torrent sites, as Microsoft will reportedly actively block The Pirate Bay, Kickass Torrents and other file-sharing websites.”

These twisted accounts are based on erroneous claims about Windows 10 that date back to August and have been well and truly debunked. Still, both sites reported them only this week, with more misinformation and scaremongering thrown in for good measure.

Of further concern is how VCPost then links to International Business Times as the source of the story, a site known for its

Only adding to the hall of mirrors, IBTimes cites Christian Post as its ‘source’ with its totally baseless and speculative article titled “The Pirate Bay Update: After The Takedown Of YIFY, Is The Pirate Bay Next?”

That in turns links to a site called ‘Yibada’ with its article “The Pirate Bay (TPB) Last Man Standing After YTS/YIFY Shutdown: TPB Next In Line?” and home to other gems including (deep breath) “After Taking Down The Pirate Bay, Will MPAA Go Easy On TPB Like It Did With YTS/YIFY? Megaupload’s Kim Dotcom Cries Double Standard.”

Then, shock/horror, Yibada directs back to International Business Times as the source – are we noticing a pattern here? Yeah? Well, the end result when searching for Pirate Bay in Google search often looks something like this. 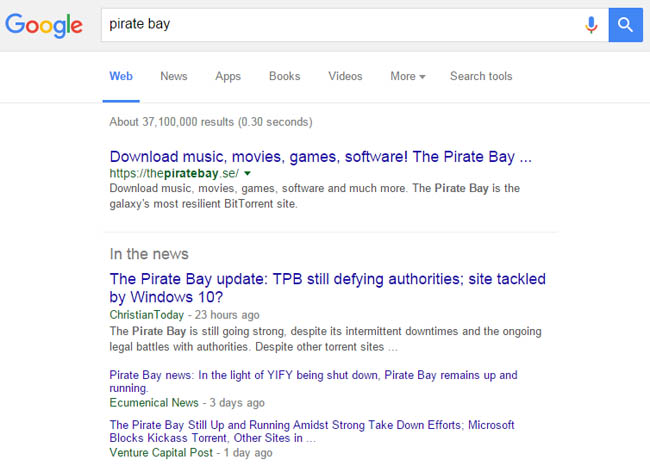 This sorry state of affairs is entirely the fault of Google. Instead of monitoring and reading every single story in its indexes and carrying out quality control of every opinion and claim linked therein, the search giant is blatantly sending unwitting visitors to uninformed sites which misleads the public and starves creators.

Oh, and apparently there are hundreds of other companies waiting in the wings with similar plights and demands. Each is keen to feature more prominently in Google’s results and each is prepared to endlessly wail over why its case deserves special attention and how Google must be to blame.

Sadly, and as the pettiness over the mind-bending Google-gaming articles listed above highlights, no one really gives a damn and it’s no wonder that Google doesn’t either. Now excuse me while I cozy up to a few politicians and go crying like a baby to the US government. Need to get in early, there’s going to be massive queue if Google becomes compliant.