Until this day, no fully-featured torrent client has managed to get listed in the store, at least not permanently but Google Play has been more welcoming. The popular app store for Android devices has had a nice collection of BitTorrent apps for years, including several well-known brands.

Last weekend, however, the developers of the relatively new BitTorrent client BiglyBT learned that the term “BitTorrent” is no longer allowed. When they pushed an update of their app on Google Play they were informed that their description violated the metadata policy.

“I reviewed your app and had to reject it because it violates our metadata policy. The app’s full description mentions other brands: Bittorrent.” 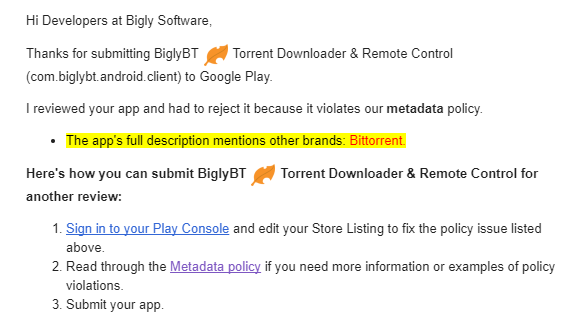 Needless to say, the BiglyBT developers were astounded. The app is created by seasoned BitTorrent developers who previously worked on Azureus and Vuze. Since BitTorrent is the name of the transfer protocol their app is using, they expected no issues.

Initially, this wasn’t the case. When the app was first submitted, Google didn’t flag the description as problematic, but something apparently changed.

“Looks like either Google just newly considered ‘Bittorrent’ a brand, or Bittorrent Inc has decided to enforce their name. I guess it’s not good enough anymore that bittorrent is also the protocol name,” BiglyBT developer TuxPaper informed us.

It could indeed have been possible that BitTorrent Inc, which owns the relevant trademark in the US, had started to enforce it. However, that’s not the case. The San Francisco company informs TorrentFreak that they haven’t asked Google to take any action.

Interestingly, BitTorrent Inc.’s own uTorrent app also disappeared from Google’s app store for a few days last month, but it’s unclear to us why this was. The app eventually returned though, and there are also plenty of other apps with BitTorrent mentions on Google Play.

The good news for BiglyBT’s developers is that their app was allowed back on Google Play after they changed all “BitTorrent” mentions to “torrent.”

Google rejections can happen automatically or after a manual review. If the former applies in this case, other developers may face the same issue in the future.

“If it’s an automated one, then other Bittorrent Apps will also be getting this rejection the next time they update their app or play metadata,” TuxPaper notes.

TorrentFreak reached out to Google for a comment on the situation but a few days have passed without a reply. So for now, it remains a mystery why Google is taking action against “BitTorrent,” and on what grounds.