Like most torrent sites, Google is no stranger to removing “copyright infringing” listings from its search results. Following up on complaints from the Chinese government and of course copyright holders, the company has been censoring its search results for years.

The filtering process is not automated and DMCA takedown requests are generally reviewed manually. Sometimes this leads to errors, such as when Google removed The Pirate Bay’s home page from its search results last October.

The Pirate Bay homepage does not list any torrent files as most people know, so there was little doubt that the filter was applied in error. Google later admitted this mistake and after blaming it on an incorrect takedown request, the company finally said that an “internal error” was the reason behind the Pirate Bay ban.

As promised, The Pirate Bay homepage soon reappeared in Google’s search results and things went back to the way they were. However, fellow torrent site BTJunkie is now in a similar position as The Pirate Bay was a few months ago. BTJunkie’s homepage no longer comes up in Google.

“In response to a complaint we received under the US Digital Millennium Copyright Act, we have removed 1 result(s) from this page. If you wish, you may read the DMCA complaint that caused the removal(s) at ChillingEffects.org,” Google explains at the bottom of the search results.

The DMCA complaint Google links to appears to come from Fox and refers to the blockbuster movie Avatar. At the time of publication the full complaint is not yet available so we were unable to verify whether it listed BTJunkie’s home page.

Unlike The Pirate Bay, BTJunkie does list several torrents on its homepage including Avatar which is among the most downloaded torrents on the site. These lists are all dynamically generated and constantly changing of course, and it is unclear whether that will warrant a removal from the search results.

TorrentFreak discussed the issue with the owner of BTJunkie who told us that he has sent a counter notice to Google (picture below). Thus far Google has not responded on the issue, but we will update this article when there’s an official statement on BTJunkie’s removal. 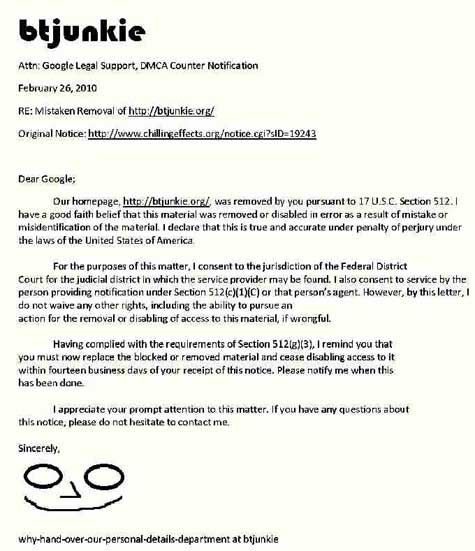