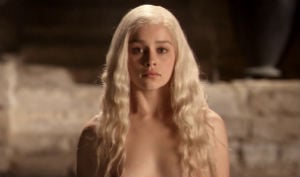 As one of its ‘hottest’ properties, HBO has become very protective of Game of Thrones.

In recent weeks thousands of pirates have received warnings in their mailboxes, and the company is also fervently trying to take down links to pirated copies of the show, with some success.

Besides targeting full copies of episodes, HBO also appears to have an eye on unauthorized compilations that focus on scenes without costumes, which are quite a common occurrence.

A quick search revealed that a lot of compromising material is still readily available, but some videos have indeed been removed. This includes the Daenerys Targaryen compilation video below.

Whether HBO’s actions will be good enough to keep GoT nude videos from spreading has yet to be seen. Once something’s on the Internet, it’s generally pretty hard to take down, and highlighting the problem may even have an adverse effect.