Are you one of those people who has always wanted to hide a torrent inside an image? Wait no longer, with Hid.im it takes just one click to convert a torrent into an image file, with the option to decode it later on.

We have to admit that the usefulness of the service escaped us when we first discovered the project. So, we contacted Michael Nutt, one of the people running the project to find out what it’s all about.

“It is an attempt to make torrents more resilient,” Michael told TorrentFreak. “The difference is that you no longer need an indexing site to host your torrent file. Many forums will allow uploading images but not other types of files.”

Hiding a torrent file inside an image is easy enough. Just select a torrent file stored on your local hard drive and Hid.im will take care the rest. The only limit to the service is that the size of the torrent file cannot exceed 250KB.

Once the torrent is converted you can easily share it via image hosting services or social networking sites that don’t allow the uploading of .torrent files.

People on the receiving end can decode the images and get the original .torrent file through a Firefox extension or bookmarklet. The code is entirely open source and Michael Nutt told us that they are hoping for people to contribute to it by creating additional decoders supported by other browsers.

The idea of converting torrents into images is not entirely new. Stegtorrent is an application that has been around for a few years already and does something similar. However, unlike Stegtorrent Hid.im is web-based and doesn’t require users to install any software.

Although we’re not really sure how useful Hid.im is for the average BitTorrent user, it does come in handy for those places where torrents are prohibited.

Decode the image and get the hidden torrent 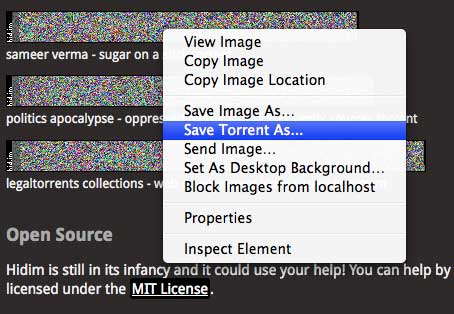