The Russian social network VKontakte (VK) has long been criticized for its passive approach to piracy. The site is flooded with unauthorized content including movies and music, all uploaded by its millions of users.

As a result the United States Trade Representative has labeled the site a “notorious market” on several occasions. While VK has taken some steps to address the issues this year, copyright holders are far from satisfied.

This week the International Intellectual Property Alliance (IIPA), which represents MPAA, RIAA and other entertainment industry groups, called out VK as one of the worst piracy havens around. The U.S. Government is organizing a hearing on Russia’s WTO implementation and in a request to testify the IIPA points out that piracy is rampant in the country.

“One such Notorious Market is vKontakte, the most popular online social network in Russia, and the largest single distributor of infringing music in Russia; it is also a hotbed for online piracy of movies and television programming.”

Despite the numerous complaints that have been submitted to the Russian authorities, widespread piracy remains a problem on the social network. Last year Russia implemented a new law that would allow copyright holders to have structurally infringing websites blocked, but attempts to target VK have failed thus far.

“To date, the Government of Russia has taken little or no action against this site, or the other sites or services identified by the U.S. and other foreign governments and copyright rightsholders. This is symptomatic of the problems of ineffective enforcement in Russia,” Schwartz adds.

The critique of VK is not new. The MPAA and other copyright holders have complained about it for years. Having this in mind, we were surprised to find that several Hollywood studios still advertise their content on VK.

In recent months copyright holders have been lobbying advertising networks to stop doing business with so-called pirate sites. However, major movie studios including Warner Bros see no problem with having a presence on VK.

Below is a screenshot of the VK profile of Warner Bros. Russian branch, which currently has 146,780 members. Aside from promoting new movies, they also list several music tracks they don’t appear to hold the copyrights to. 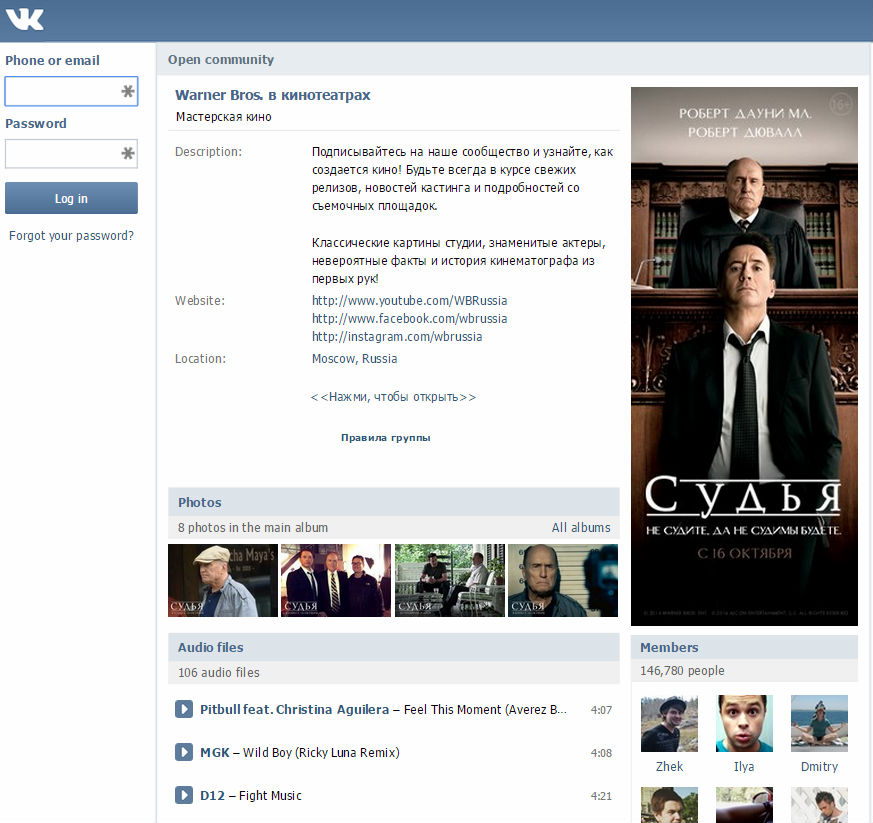 Warner Bros. is of course not the only studio with an official VK account. Universal Pictures has a dedicated page for Russian fans too, and so do Disney, Marvel and 20th Century Fox.

The above are just a few examples. There are many other companies represented by the IIPA who have a profile on the “notorious pirate site”, Microsoft included.

So instead of asking Russia to take action against the site, shouldn’t these companies stop advertising on it first? Considering the fact that they place VK in the same category as The Pirate Bay, that would make sense.

Or perhaps the Hollywood studios will create an official Pirate Bay profile, to start uploading trailers of their latest movies there as well…?