“I Leaked Black Ops” – Confessions of an Xbox 360 Pirate

In mid-October it was reported that Xbox 360 retail versions of the much-awaited Black Ops game had been stolen from an Alabama pressing plant and that Treyarch’s community manager, Josh Olin, had been desperately trying to contain the problem. Here’s the inside story of that leak, how it was contained and how the pirates won in the end.

Apparently someone who had acquired a copy of Black Ops had offered one of the copies to an Internet user known as ‘Ungodly Leaker’, someone who was also allegedly involved in the earlier leak of Halo:Reach. In order to raise funds to buy the game (the seller wanted around $450 for it), Ungodly Leaker started gathering donations on an Internet forum, which for the purposes of this article shall remain nameless.

Funds gathered, and it was time to get hold of the game. The seller wasn’t within driving distance of the small group involved with the purchase, so someone who they barely knew but had gained some trust with was given half of the donated funds as an advance and given the task of physically collecting the disc.

But there was a problem. Someone who appeared to be Treyarch’s Josh Olin was watching the whole deal going down. Sources with access to privileged information told TorrentFreak that after IP address checks, it was confirmed to be really him.

Olin went on to warn a handful of members of the forum about not leaking the game – somehow he had managed to find out their personal telephone numbers. It was agreed with Olin that the copy of the game would be collected by Treyarch and taken back into safe care.

Although Treyarch were successful this time, other sources for Black Ops were on the loose.

“A week or so later I start to get some real good leads, some of my usual contacts/sources were notifying me that they would be getting the game within the next few days and would sell it to me for a decent price,” a key figure in the eventual leak of the Xbox 360 version of Black Ops told TorrentFreak.

“Obviously I kept pretty quiet about it, it’s always the best thing to do with something like this. You never know what could happen.”

By October 30th, T.P as he is known, had two separate people who said they were willing to supply the game. But the 30th was a Saturday which meant that the game would delivered by 2nd November at the earliest – not nearly quick enough for someone used to the efficiency of digital transfers.

Unexpectedly, however, another source appeared – one that had not only got the game but had already and conveniently ripped it to an ISO. Confirmed as legitimate, the deal was on. For $50.

The screenshot that was used to prove the ISO was genuine 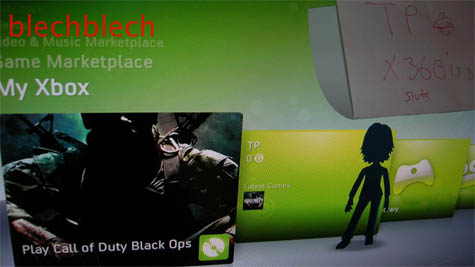 True to his word the supplier uploaded the game to a file-hoster (which must remain nameless) in around 70 parts, some of which had unique passwords. The next job was to get Black Ops spread to a worldwide audience and for this T.P received assistance from a member of the Scene. Through highly encrypted connections, uploads were made to a very large private BitTorrent tracker and various Usenet servers.

“When the ISO was being uploaded/spread around I was receiving a lot of abuse and death threats from forums, on IRC and on MSN,” T.P told TorrentFreak. “Makes me sick how people expect something for nothing, and when there is a slight hiccup they think they have the right to complain about it.”

In the end the release got out there but, in true pirate style, T.P’s leak was quickly pirated by someone else wanting to take the credit for his work. As can be seen on this article on Releaselog, the release of the version Call of Duty Black Ops READNFO XBOX360-FW was ‘nuked’ (disallowed) by the warez Scene for being from a “stolen source”.

“This release is just a P2P repacked rip (Release: Call.of.Duty.Black.Ops.XBOX360-T.P),” explained Rlslog adding, “..available 1 hours before on some trackers.”

Of course, being first is everything when releasing and T.P is very happy with the results here.

“Being the first to leak a big title is great motivation as many will remember you for months/years in the future and recognise your work,” he told us.

“I enjoy seeing my work all over the internet, people saying thanks etc. It’s nice to see people who appreciate the time spent to release something.”

Indeed, a huge number of people will be saying “thanks” for T.P’s efforts. As of last week, the Xbox 360 version of Black Ops had been downloaded more than half a million times and will certainly end up in TorrentFreak’s Top 10 most downloaded games of 2010.