Last week, Julian Harvey and Enzo Tedeschi (who together form Australia-based Distracted Media) had a huge battle on their hands.

Their upcoming movie, The Tunnel, which is set for a release later this year, was badly in need of an Internet Movie Database listing. Unfortunately IMDb didn’t want to play ball.

From a standing start in June this year, Enzo and Julian had submitted their upcoming horror movie to IMDB on a number of occasions, five to be exact, but to no avail. Despite having backing from Zapruder’s Other Films which already have IMDb listings, the Amazon-owned company continually denied The Tunnel a listing.

Earlier, Enzo told TorrentFreak that he suspected that it’s the movie’s BitTorrent-only distribution model which caused this negative reaction from IMDb.

So, in a last-ditch attempt to bring the movie listings site onside, the makers of The Tunnel penned an open letter to IMDb last week. That seems to have had the desired effect.

“We won!” shouted an excited Enzo to TorrentFreak in an email a few minutes ago.

Indeed, as can be seen from the official listing, The Tunnel now has pride of place on IMDb.

The Tunnel on IMDb 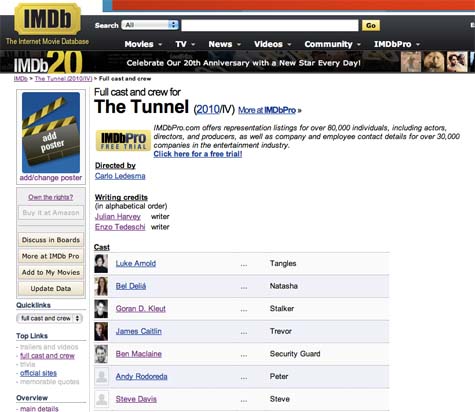 “I would say it’s a small victory for the project, and a bigger win for people power, which is what this project has been about from the start,” Enzo told us. “If the support the project is receiving continues, hopefully it can set a successful precedent.”

No reason has yet been given for the sudden turnaround, but those behind the movie are grateful nonetheless.

“It may seem like a small thing to IMDb, but it is an indispensable tool for us to be able to market our project effectively and help ensure it’s success,” wrote Julian and Enzo in a thank you message to IMDb.

“It’s also reassuring to see that after 20 years of operation, that you are still able to listen to your user base. We’re sure that the online clamour made by our fans and supporters has not been lost on you.”

The Tunnel will be released on BitTorrent late 2010.