I think this is partly because how we are redefining politics – as in the literal meaning of the word. When people hear “politics”, they usually think of the previous generations of politicians bickering over minute details in boring sections of the welfare systems – things that just don’t apply to people’s ordinary lives.

All of a sudden, the Pirate parties are making it possible to vote for the defense and enrichment of the connected lifestyle, which is relevant to the core for the net generation. Thus, because you can vote for it, by definition, it becomes politics – which it wasn’t before.

I guess that’s why it took a long time for me to reconciliate with the fact that i’m a politician. I grew up knowing that politicians are boring, pretentious and infighting. It is only with the expanded use of the word that it makes sense that fighting for civil liberties is, in fact, policymaking. And those of us who fight for net liberty have become politicians, as people can vote for us to… fix things.

Politicians have been de-pedestalized. And that’s good every part of the way. 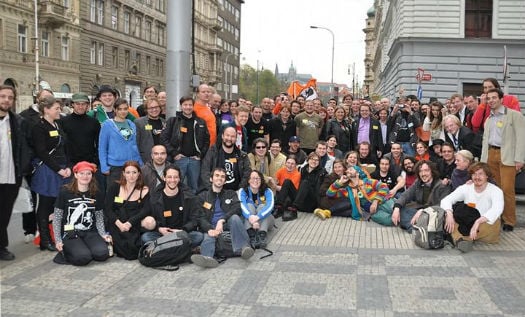 That’s why it is fantastic that the German Piratenpartei is polling at 13% and that several more are on the verge of breaking through.

I was struck at the meeting by how many new Pirate parties are on the rapid rise: Estonia, Lithuania, Poland, Greece, Slovenia, Slovakia, Serbia, the list goes on.

When I was at last year’s PPI meeting, I confided in some people that I thought we could approach 15% long-term. If somebody had told me we’d be there in 12 months, I would not have believed them. Would Not. Things are progressing much faster than I have anticipated.

Czech media was everywhere during the international meeting. The Greek Pirates are polling at one percent, just three months after founding. PP Luxembourg is showing clear signs of making the next election.

And as I flipped open my Android netbook to write the summary of the meeting, I learned that the Austrian Pirate Party had just taken its first parliamentary seat, in the local election of Innsbruck.

This journey is great to be part of.