The Party currently has dozens of members in elected offices across Germany, which is more than in all other countries combined. Most notable is the unprecedented win in the elections for the Berlin state parliament last summer, where the Pirates got 9 percent of the vote.

Continuing this success the Party is now conquering the rest of Germany. For the first time in its history the Pirate Party is now virtually the third largest party in Germany, achieving 13% of the total vote in a recent poll.

The Pirate Party surpassed the Green Party, which peaked at 11%.

In common with all other Pirate Parties across the world, the German Pirate Party’s policy focuses around three pillars; shared culture, free knowledge, and fundamental privacy. Based on recent poll results, these key points appeal to a wide audience.

While the results of the polls are promising, there is still a long way to go. The next federal elections are held late 2013, more than a year away.

The success of the German Pirates is mimicked by their neighbors in Austria, where the local Pirate Party got 7% of all votes in a recent poll.

Illustrating that the Pirates are not a fringe group, 22% of the respondents said they could see themselves voting for the Party in the coming elections.

The coming months will be crucial for both parties, as they have to keep the momentum going towards the new elections. Being in the spotlight is great for as long as there’s good news to sell.

Times can change quickly as we’ve seen in Sweden, where support for the local Pirate Party plunged a year after the European elections, resulting in a failed election bid in 2010.

Time will tell whether Europe is ready for the Pirates now. 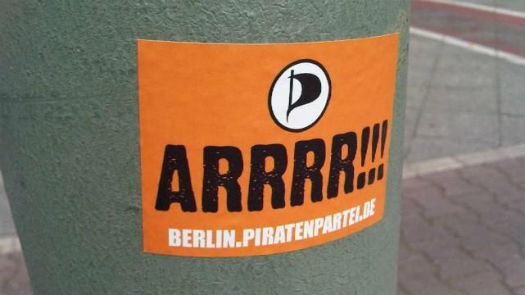