With millions of views per day, ‘IndoXX1’ is of one the largest pirate sites on the Internet.

In the West, the site doesn’t ring a bell with most people. In Indonesia, however, it is among the top 25 most visited websites in the country, only beaten by Google, YouTube, and a few others.

The site’s popularity didn’t go unnoticed by Hollywood. Earlier this year the MPA listed the site in its yearly overview of notorious pirate sites submitted to the US Trade Representative.

“Indo 21” has emerged as the main brand for piracy in Bahasa throughout Indonesia and Malaysia. One of the related sites, indoxx1.center, has a local ranking of 40 in Indonesia according to SimilarWeb data with 23.85 million monthly visits in August 2019,” MPA wrote.

Today this information is already outdated. While IndoXX1 remains the most visited pirate brand in the country, it continuously relocates in order to evade local blocking efforts.

Most recently the portal was available through domains including idxx1.cam, indoxx1.art, and indoxx1.kim. However, a few days ago, Indonesia’s Information and Communications Ministry (Kominfo) stepped in to block these domains.

Kominfo’s actions coincide with the release of a new survey, commissioned by the Asia Video Industry Association’s Coalition Against Piracy (CAP), which shows that streaming piracy is rampant in Indonesia.

According to the study, 63% of Indonesians have accessed streaming piracy websites or torrent sites. In addition, 29% of consumers use set-top boxes that can stream pirated video content, with indoXXI(Lite) being the most popular app by far.

This isn’t the first time Kominfo has taken action against IndoXX1. Other domains have been banned previously as part of a national anti-piracy effort. In fact, the Government organization has blocked more than 1,000 domain names since July. 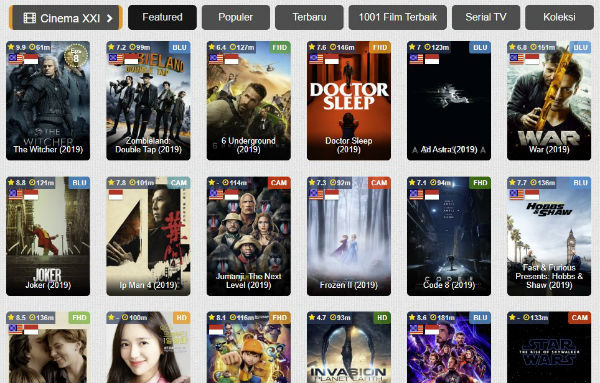 Revealing the gravity of the situation, Kompas reports that these anti-piracy efforts can also count on the support of the national police.

While it’s clear that the authorities are taking the piracy problem seriously, it seems rather hard to curtail. On social media, many people are pointing out alternatives and, when we checked, indoXXI mirrors or copies were indeed available.

Many of the site’s users don’t really seem impressed by yet another blockade, and a meme illustrating the ineffectiveness of the measures has been viewed over a dozen million times in a few days.

Since blocking isn’t 100% effective, to say the least, it may also be worth looking at other means to address the piracy problem. At the supply end, for example. That’s where help from the Government may also be welcome.

Local news site Coconuts reports that Indonesia’s largest Internet provider Telkomsel currently blocks its subscribers from accessing Netflix. The state-owned ISP officially bans Netflix on censorship grounds, but some believe there may be financial reasons as well, as the company has ties to a local streaming service.