The companies, which control the publishing rights to songs by Katy Perry, The Beatles and David Bowie among others, claim that Cox has given up its DMCA safe harbor protections due to this inaction.

The case revolves around the “repeat infringer” clause of the DMCA, which prescribes that Internet providers must terminate the accounts of persistent pirates.

As part of the discovery process the music outfits requested details on the accounts which they caught downloading their content. In total there are 150,000 alleged pirates, but the court limited the initial disclosure to the top 250 infringing IP-addresses in the six months before the lawsuit was filed.

Although the copyright holders provided time-stamps of the alleged infringements, Cox responded quite literally to the court order. This means that in addition to historical account information, they also handed over the personal details of current subscribers.

In a recent court filing Cox explains the disclosure is not a mistake (pdf), and the ISP says it informed the current account holders that their information will be handed over to the music companies.

In a letter informing the subscribers, Cox says that customer service is not allowed to assist them and that subscribers should contact a lawyer instead.

“We regret being placed in the position of sending this letter, but want you to have every opportunity to protect your interests. We are not permitted to give you legal advice and encourage you to consult an attorney immediately,” Cox writes. 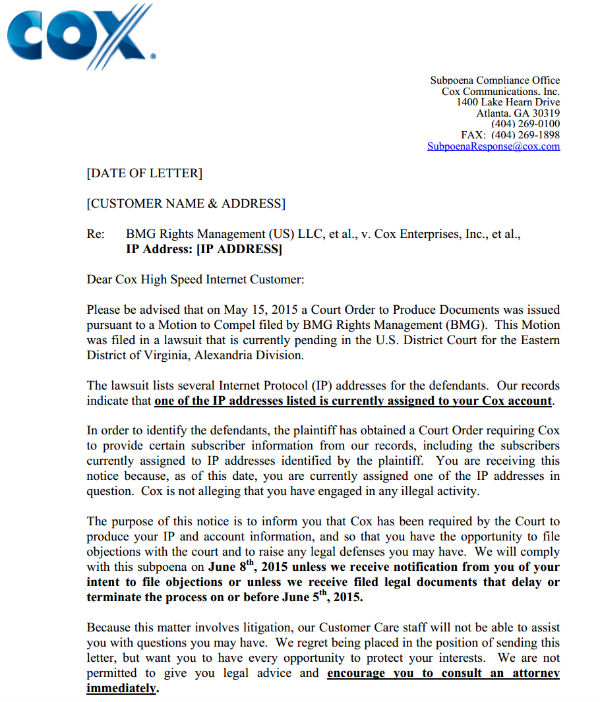 Many of the current subscribers are surprised to be included and 32 have indicated that they object to having their personal data handed over.

One of the subscribers asked the court to limit the scope of the order to the time-frame when the actual infringements took place, noting that he or she wasn’t even a Cox customer when the files were shared.

“Cox intends to produce the personal account information of all customers assigned to the IP-addresses in question — even those who were not subscribers to Cox during the relevant time periods listed in the discovery request!”

“This broad reading of the Court’s Order could drag dozens of innocent parties into this litigation,” the subscriber notes. 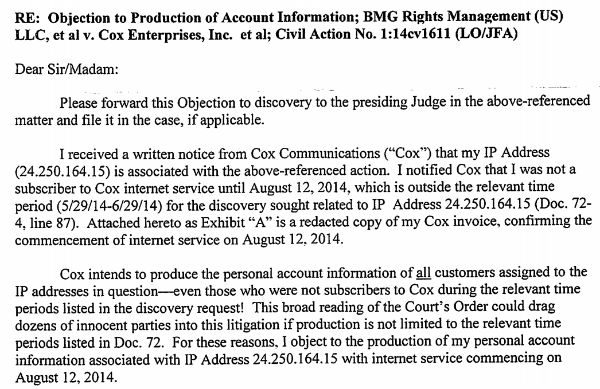 Thus far Cox has not handed over any information related to subscriber who objected, awaiting further instructions from the court. However, the personal details of the other 216 account holders has already been disclosed.

In addition to the current subscribers Cox also matched 139 historical IP-addresses to the relevant personal details. Aside from 17 customers who objected, these details were handed over as well.

It’s unclear why Cox didn’t raise the issue of the current subscribers in court before disclosing their details. The information holds no value to the music companies who requested it, but is quite a burden to the account holders.

The music companies previously stated that they don’t intend to sue any individual subscribers, but several are unaware of this promise and fear getting caught up in an expensive legal battle.