In an effort to reduce piracy, copyright holder all over the world are trying to get popular torrent sites blocked by ISPs.

In 2009 Ireland was one of the first countries in the world to have an ISP block The Pirate Bay on copyright grounds. Eircom backed out of a court battle with the major music labels and blocked the site voluntarily.

Getting other providers to follow suit proved to be more difficult due to legal complications, but last year the ball was rolling again.

After this success the labels moved on to their next target, KickassTorrents, or KAT for short. Following The Pirate Bay blockade KAT quickly took over the crown, and up until last week was one of the 25 most-visited websites in Ireland.

Hoping to significantly reduce this threat the record labels applied to the High Court to have local ISPs block subscriber access to KAT. The request was successful and Mr Justice Kelly ordered the new blockade in December.

This week most ISPs implemented the blockade, much to the disappointment of Irish KAT visitors.

Interestingly, Eircom, the largest Internet provider in the country, was not included in the court case, but together with several other ISPs chose to implement a block voluntarily. As a result, Eircom subscribers are now greeted with the following message when they attempt to access the site. 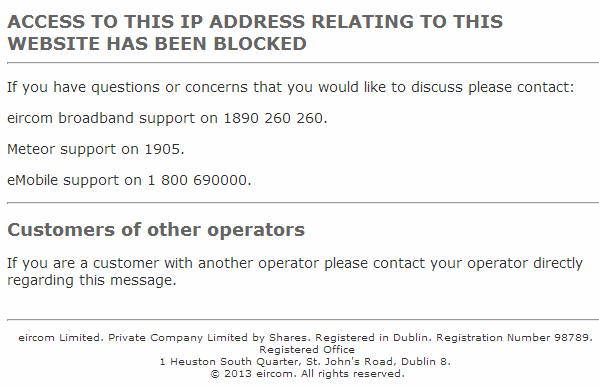 As with all blockades there are still plenty of workarounds that let people access the KAT site. Several users note that KAT proxies work just fine, and a VPN also lifts all restrictions.

Nevertheless, the music labels will celebrate the new blocks as a victory and, with KAT taken care of, they are likely to prepare another lawsuit targeted at the next large torrent site, continuing the game of Whack-A-Mole..

Update: The KAT team tells TorrentFreak that the traffic to their site is severely impacted by these blockades. They are advising users to use a VPN. Proxies are also an option, although people have to be careful as these are not officially run by KAT, so the proxy owner could harvest logins and passwords.

“We are still getting traffic from those countries where KAT is blocked. But its amount is significantly lower (up to 10% from what we had before).

“These measures can be be pretty effective when appropriate authorities react very quickly on domain or IP change. For example, for Italy it’s just 3 days.”

“Our suggestion would be to use VPN servers placed outside country where site is banned and user is actually present. Also it will have sense to start using Google DNS or similar service to bypass domain block.”

“As an alternative it’s also possible to start using any KAT mirrors. But all those mirrors are provided by 3d parties so we would not recommend to enter credentials while user are using them.”