isoHunt Triples Its Torrent Index In a Year

Founded in 2003, isoHunt is one of the oldest BitTorrent sites that remains around today. The site has millions of pageviews each day and searches through nearly 5 million torrent files. At the time of writing isoHunt indexes 4,973,833 torrents, which totals an impressive 10,712 terabytes of data.

Despite the legal issues the site is facing, isoHunt has more than tripled the number of indexed torrents during the last year. The biggest jump occurred during last summer when the isoHunt team updated its indexing code and performed a thorough re-crawl of most of the sites they index.

This resulted in an instant doubling of the number of torrent files indexed by the site, from 1.65 million to 3.49 million. During the remaining months the index continued to expand, adding another million and a half torrents. 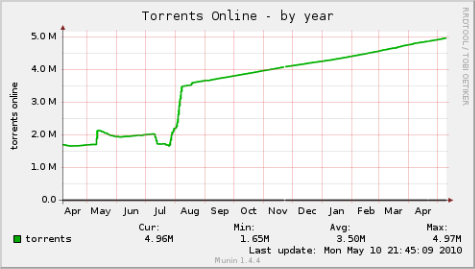 One of the reasons for the rapid increase in torrents is that older torrents now remain indexed. Previously these were pruned and this caused an occasional drop in the torrent count as can be seen in the graph above.

“We changed it to not prune at all as our system can handle it, and old or unseeded torrents would just naturally be poorly ranked in search results,” isoHunt founder Gary Fung told TorrentFreak. “I believe we have the largest torrents index available,” he added.

IsoHunt’s expansion is not limited to the increase in torrents either. In the past year, the site’s visitors also continued to grow up to millions of pageviews a day. This mind-boggling statistic places the site in the list of 250 most visited websites on the entire Internet.

“Traffic has steadily grown,” Gary told TorrentFreak, adding that there was a slight setback when U.S. visitors were redirected to a Lite version of the site. “People don’t seem to like the Google-like list format of the [isoHunt Lite] search results even though the index is the same. We are working on improving it,” Gary told us.

IsoHunt decided to redirect all visitors from the United States to a Lite version of the site due to the pending court case with the MPAA. With this action, isoHunt hopes to prevent a judicial order which would require the site to implement a mandatory filter and remove torrents based on a list of ‘banned words’.

Aside from the courts there is very little that can stop isoHunt from growing even further. Undoubtedly that would also mean more hardware investments, as the old rack in the picture below wont keep up forever. 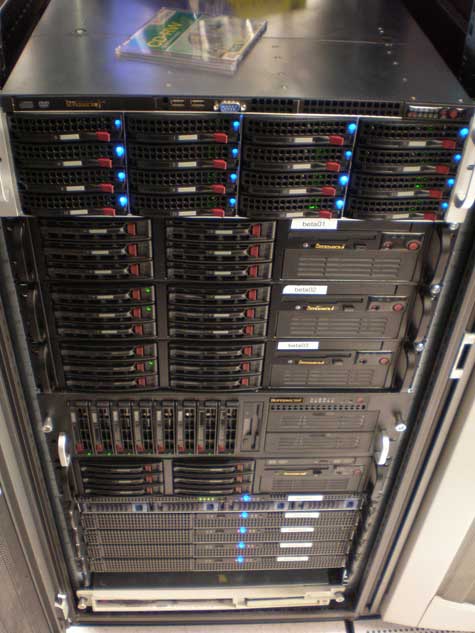