Last November several pirated copies of 4K videos started to leak from both Netflix and Amazon. These leaks were unusual as online 4k streams were always well protected against pirates.

While it’s still not clear how these videos were copied, a new lawsuit from Warner Bros. and Intel’s daughter company Digital Content Protection (DCP) suggests that HDFury devices may be involved.

The companies have filed a lawsuit at a federal court in New York against the maker of the devices, technology company LegendSky.

Starting a few weeks ago the Chinese company launched a range of new devices which allow users to strip the latest HDCP encryption. This hardware sits between a HDCP-compliant source device and another device, allowing it to pass on a “stripped” 4K signal.

The Hollywood studio and DCP argue that these devices violate the DMCA’s anti-circumvention provisions and should no longer be sold to prevent further damage.

One of the HDFury devices 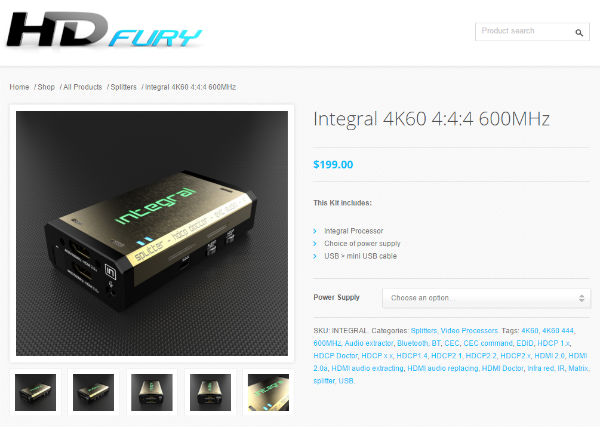 TF obtained a copy of the complaint in which Warner Bros. allege that the hardware threatens copyright holders because it enables users to render 4K video “in the clear,” making it easy for pirates to share it online.

DCP, on the other hand, is harmed because it owns and controls the HDCP standard. When this copy protection is easily circumvented it loses much of its value and potential licensing revenue.

“The HDFury Devices harm DCP because, among other things, they undermine the effectiveness of HDCP, lower the value of HDCP, and thereby jeopardize DCP’s ability to license HDCP to Digital Device manufacturers and Digital Content owners,” the complaint reads.

Both Warner Bros. and DCP accuse LegendSky of violating the DMCA’s anti-circumvention provisions. In addition, they claim that the company violated the Lanham Act by falsely stating that the HDFury devices comply with HDCP’s license requirements.

The plaintiffs ask the court to prohibit these devices from being sold and advertised. In addition, they want to be compensated for the damages they’ve suffered.

In discussions with TorrentFreak, someone who recently purchased an HDFury 4K ‘stripper’ confirmed that the product does indeed work. The first devices were shipped from China early November, a few days before the first 4K rips appeared online.

For Warner Bros. it is essential that 4K copy protection remains strong. The company just announced that it will release several dozen 4K Blu-ray movies this year and would like to keep these out of the hands of pirates.