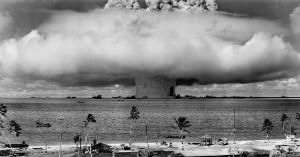 During this time, many sites have shut down, either voluntarily or forced by a court order.

This week meta-search engine Torrentz joined this ever-expanding list. In what appears to be a voluntary action, the site waved its millions of users farewell without prior warning.

The site’s operators have yet to explain their motivations. However, it wouldn’t be a big surprise if the continued legal pressure on torrent sites played a major role, with KAT as the most recent example.

And let’s be honest. Running a site that could make you the target of an FBI investigation, facing over a dozen years in prison, is no joke.

Looking back at the largest torrent sites of the past 15 years, we see a familiar pattern emerge. Many of the sites that make it to the top eventually fall down, often due to legal pressure.

Suprnova was one of the first ever BitTorrent giants. Founded by the Slovenian-born Andrej Preston, the site dominated the torrent scene during the early days.

It was also one of the first torrent sites to be targeted by the authorities. In November 2004 the site’s servers were raided, and a month later Preston, aka Sloncek, decided to shut it down voluntarily. The police investigation was eventually dropped a few months later.

When Suprnova went down a new site was quick to fill its void. LokiTorrent soon became one of the largest torrent sites around, which also attracted the attention of the MPAA.

LokiTorrent’s owner Ed Webber said he wanted to fight the MPAA and actively collected donations to pay for the legal costs. With success, as he raised over $40,000 in a few weeks.

However, not long after that, LokiTorrent was shut down, and all that was left was the iconic “You can click but you can’t hide” MPAA notice.

In 2006 TorrentSpy was more popular than any other BitTorrent site. This quickly changed when it was sued by the MPAA. In 2007 a federal judge ordered TorrentSpy to log all user data and the site opted to ban all U.S. traffic in response.

March 2008 TorrentSpy owner Justin Bunnell decided to shut down completely and not much later his company was ordered to pay the Hollywood studios $110 million in damages.

After TorrentSpy’s demise, Mininova became the largest torrent site on the net. The name was inspired by Suprnova, but in 2008 the site was many times larger than its predecessor.

Its popularity eventually resulted in a lawsuit from local anti-piracy outfit BREIN, which Mininova lost. As a result, the site had to remove all infringing torrents, a move which effectively ended its reign.

Today the site is still online, limiting uploads to pre-approved publishers, making it a ghost of the giant it was in the past.

In 2012, shortly after the Megaupload raid, torrent site BTJunkie shut down voluntarily.

Talking to TorrentFreak, BTjunkie’s founder said that the legal actions against other file-sharing sites played an important role in making the difficult decision. Witnessing all the trouble his colleagues got into was a constant cause of worry and stress.

“We’ve been fighting for years for your right to communicate, but it’s time to move on. It’s been an experience of a lifetime, we wish you all the best,” he wrote in a farewell message. 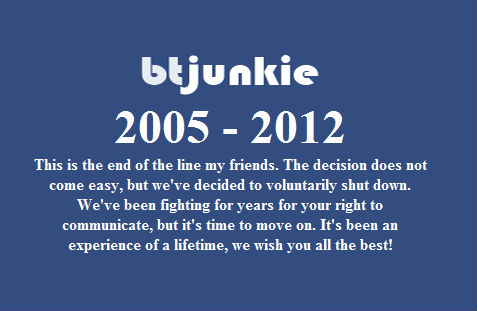 The shutdown of isoHunt a year later wasn’t much of a surprise. The site had been fighting a legal battle with the MPAA for over a decade and eventually lost, agreeing to pay the movie studios a $110m settlement.

As one of the oldest and largest sites at the time, the torrent ecosystem lost another icon. However, as is often the case, another site with the same name quickly took over and is still operating today.

The story of EZTV’s demise is quite different from the rest. The popular TV-torrent distribution group shut down last year after a hostile takeover.

Strangely enough, many people don’t even realize that it’s “gone.” The site continued to operate under new ownership and still releases torrents. However, in solidarity with the original founders these torrents are banned on several other sites.

What started as a simple movie release group in 2010 turned into one of the largest torrent icons. The group amassed a huge following and its website was generating millions of pageviews per day early last year.

In November 2015 this ended abruptly. Facing a million dollar lawsuit from Hollywood, the group’s founder decided to pull the plug and call it quits. Even though various copycats have since emerged, the real YIFY/YTS is no more.

Three weeks ago Polish law enforcement officers arrested Artem Vaulin, the alleged owner of KickassTorrents. The arrest resulted in the shutdown of the site, which came as a shock to millions of KAT users and the torrent community at large.

Out of nowhere, the largest torrent index disappeared and there are no signs that it’s coming back anytime soon. The site’s community, meanwhile, has found a new home at Katcr.to.

Torrentz is the last torrent site to cease its operations. Although no official explanation was given, some of the stories outlined above were probably weighed into the founders’ decision.

So what will the future bring? Who will be the next giant to fall? It’s obvious that nearly nothing last forever in the torrent ecosystem. Well, apart from the ever-resilient Pirate Bay.

And there are several other alternatives still around as well. ExtraTorrent has been around for a decade now and continues to grow, and the same is true for other popular torrent sites.

At least, for now…