Jamie Cullum Admits to Being an Ethical Music Pirate 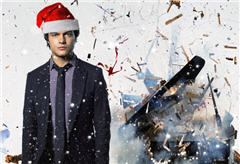 IFPI and the BPI would have people believe there are millions upon millions of illicit file-sharers in Britain, milking the very life-blood out of the industry. Much of their online presence is gearing to achieving this impression.

While the situation is a lot less serious than they make out, it’s difficult to dispute that in the absence of really attractive alternatives, large numbers of people are indeed turning to file-sharing networks and services to satisfy their music discovery needs.

The BPI and their international counterparts would also like to create the impression that the situation is very much black and white, that an illegal downloader engages in his or activities in order to get music for free and thus never makes a contribution to the industry. But this assertion, that file-sharers don’t contribute in any meaningful way, is simply false and definitely not that black and white.

Many people are using file-sharing as a music discovery tool. Indeed, file-sharers are some of the industry’s most knowledgeable and dedicated followers, but those who have simply found new, more efficient and increasingly user friendly ways to acquire music. They are, however, happy to put their hands in their pockets for the right products, for the right concerts and for quality merchandise.

One such individual is English singer-songwriter Jamie Cullum, who in a recent interview admitted that, like many of his countrymen, he is an avid user of file-sharing networks to acquire illegal copies of music.

“I’m a music consumer of the highest order, and I spend an awful lot of my time looking for music, buying music, downloading music legally and illegally. I make no bones about it – if there’s some Thom Yorke EP floating around and it’s not out until next week, then I’ll download it illegally,” he explained.

But like many file-sharers, Cullum’s connection to the music doesn’t stop there. “However, the following week I’ll buy it because I want the artwork, and I want to see the notes and to find out where it was recorded and all the rest,” he added.

The flip side, says Cullum, is that his own album ‘The Pursuit’ has also been heavily pirated after being leaked online, with file-sharers downloading it as many times as it was legally purchased. Cullum shares the views of many when he says that all-out rampant piracy is not the answer, but nor is taking measures to punish file-sharers.

“The problem is, we’ve gone too far. You can’t start punishing people – you’d be punishing people like me, who spends thousands of pounds a year online, because I illegally downloaded something from a blog,” he says pragmatically.

The solution to the problem, says Cullum, lies with competition. Somehow the music industry needs to come up with legal services that are “so sophisticated and so comprehensive” that people won’t be interested in going to file-sharing sites.

Jamie Cullum begins his next US tour in March 2010 and won’t have much difficulty selling-out his chosen venues. Just how many of the people in attendance will have experienced his music after getting some samples from file-sharing networks is open to speculation, but they will be there – spending their money and supporting the artist.

In the end, perhaps that’s all that matters.