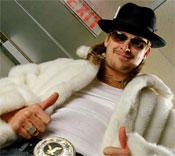 In recent comments, Kid Rock – real name Robert Ritchie – has said that his record company had previously asked him to stand against “illegal downloading” because he was told that people were stealing from him. According to a BBC report, his response to the label was: “Wait a second, you’ve been stealing from the artists for years. Now you want me to stand up for you?’

In true rock and roll style, this performer wasn’t going to do as he was told. “I was telling kids – download it illegally, I don’t care,” he said. “I want you to hear my music so I can play live.”

Now, in 2008, Kid Rock is boycotting iTunes because he says that artists are not getting their fair share of the revenue generated by the Apple store. He is annoyed at this ‘old system’ “where iTunes takes the money, the record company takes the money, and they don’t give it to the artists”.

Kid Rock crucially talks about how the Internet should’ve been a “great opportunity for everyone to be treated fairly, for the consumer to get a fair price, for the artist to be paid fairly, for the record companies to make some money.”

Of course, as the singer notes, it hasn’t turned out that way but concedes that he’ll probably have to put his music on iTunes at some point but notes that he’s doing ok overall without it: “I’ve just sold a million records, I’m not really feeling that blow” he said.

With his tongue firmly in his cheek, Kid Rock also says he doesn’t agree with the one-sided argument against file-sharing: “I think we should level the playing field. I don’t mind people stealing my music, that’s fine. But I think they should steal everything. You know how much money the oil companies have? If you need some gas, just go fill your tank off and drive off, they’re not going to miss it.”

Will this rocker be taking his own advice? Probably not. “No, I don’t steal things. I’m rich” he said.